Nearby Superbubble in the Night Sky 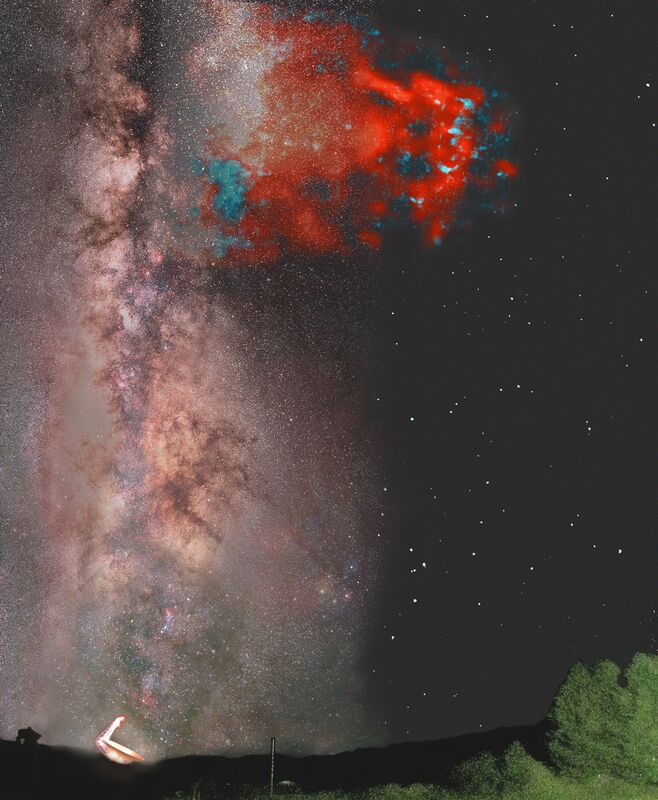 A nearby superbubble discovered with the 100 m Green Bank Telescope (GBT) is shown as if we were able to see it with the naked eye in the night sky. A picture of the night sky taken from the NRAO Green Bank observatory site is overlaid by an optical image of the Milky Way and a false color image of the superbubble. All angular sizes and relative positions of the objects are real, bright stars were used to match the images together. In the bubble, blue color is neutral hydrogen detected by its 21 cm radio emission, red -- ionized hydrogen detected by its optical emission, white -- where there are matching amounts of both neutral and ionized hydrogen. On the left side of the horizon we see a silhouette of the 140-foot telescope and the brightly lit GBT. The part of the Milky Way shown in the image is about 1/6 of its total circumference. The area of it close to the GBT is the Galactic center. The wide dark lane sweeping across the lower side of the bubble is known as the Great Rift -- a stretch of cosmic dust blocking all the light behind it including some of the superbubble's ionized hydrogen emission -- that is why we see a blue patch there. Above the right side of the horizon we see an arc of 5 stars -- part of Corona Australis constellation, above it -- the "head" and "pincers" of Scorpius, and still higher the base of Ophiuchus, the constellation in which most of the superbubble is located. If one wants to locate the superbubble's position in the sky, she/he should look for the Bull of Poniatowski asterism marking the very middle of the bubble. However even if our eyes were able to see 21 cm radio emission and were sensitive enough for the ionized hydrogen line, we still would not see this superbubble because it is hidden behind much brighter emission of closer Galactic gas. Only specially designed experiments with state-of-the-art astronomical equipment have allowed us to discover it. Such superbubbles are known to be blown by powerful stellar winds and supernovae occuring in star clusters in arms of both our and other spiral galaxies. It took approximately 30 million years and the energy of about 100 supernovae to create this one, which is more than 3 kpc high and is located about 7 kpc from the Sun and 4 kpc from the Galactic center. It is currently at the latest stages of its development, its expansion is stopped and its walls are starting to decompose.
Images used in this collage: 1. HI image of the bubble: About 250,000 GBT HI spectra integrated over 60-160 km/s LSR. The integration covers all the tangent point velocities at these longitudes. The intensity scale has been multiplied by sine of Galactic latitude to compress the dynamic range and show structures more clearly. Angular resolution is about 9 arcmin. 2. H-alpha image of the bubble: integrated over 55-95 km/s LSR, as observed with the Wisconsin H-Alpha Mapper, data of the WHAM survey by Haffner et al. 2003 interpolated and imaged by Yurii Pidopryhora. Angular resolution is about 1 degree. 3. Wide angle Milky Way images by Wei-Hao Wang freely released for non-commercial use. 4. Images of Green Bank night sky and the GBT by Yurii Pidopryhora. Please refer to Pidopryhora, Lockman and Shields paper submitted to ApJ for more scientific information on the superbubble.