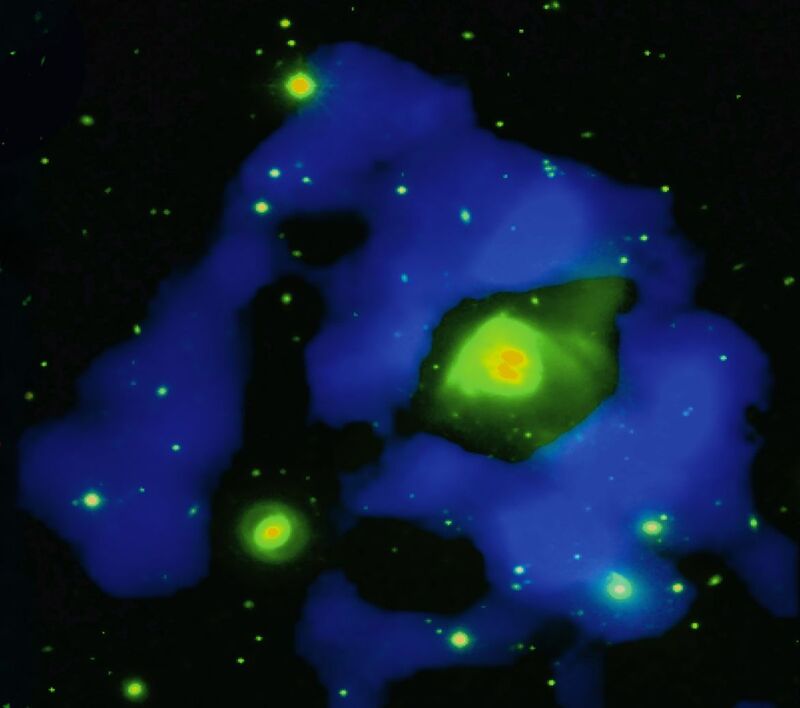 Composite image of the nearest Ultraluminous Infrared Galaxy (ULIG), Arp 220. The image shows the optical starlight depicted in green, yellow, and orange, with the neutral atomic hydrogen gas depicted in blue. ULIGs emit more energy in the Infrared than at any other wavelength. This energy arises from a powerful dust-enshrouded starburst, believed to be triggered when two galaxies smash together. The dust is heated by the UV light emitted by the young, hot stars made in the starburst, and re-radiate this energy at infrared wavelengths. The peculiar optical morphology of this system supports the idea that Arp 220 is the result of two galaxies merging into one, and the neutral atomic gas in the outer regions indicates that the galaxies which merged were gas-rich spiral galaxies. There is actually not a hole in the atomic gas distribution; the central gas is absorbed against a bright central radio continum source (not shown) so it is not seen in emission.
VLA C+D array observations at 30" resolution. Optical image is a 900 sec R-band observation with the University of Hawai'i 88" telescope obtained in June 1995.