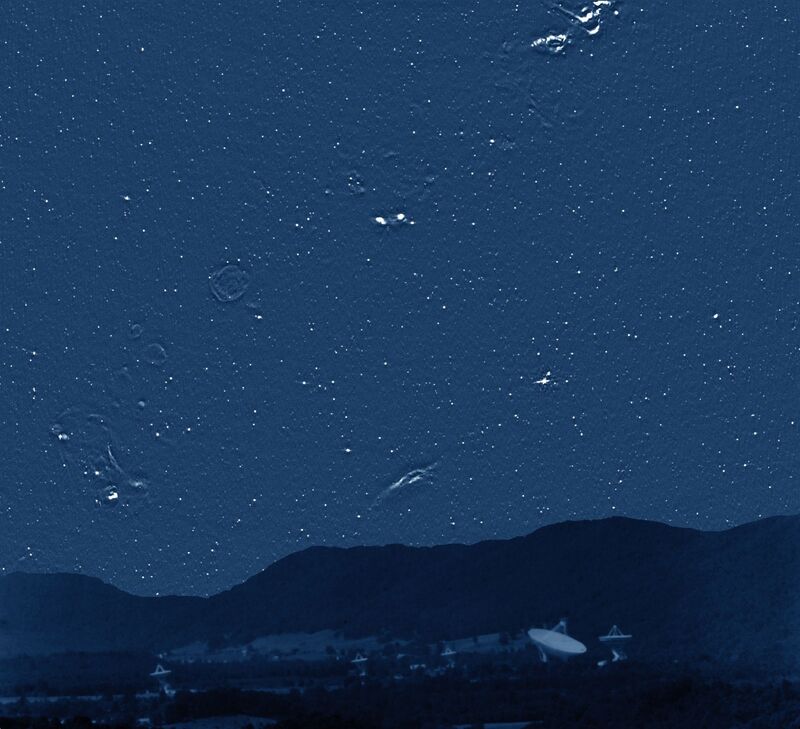 This composite picture shows the radio sky above an optical photograph of the NRAO site in Green Bank, WV. The former 300 Foot Telescope (the large dish standing between the three 85 foot interferometer telescopes and the 140 Foot Telescope) made the 4.85 GHz radio image, which is about 45 degrees wide. Increasing radio brightness is indicated by lighter shades to indicate how the sky would appear to someone with a "radio eye" 300 feet in diameter. The optical and radio skies reveal "parallel universes" containing quite different objects. The extended radio sources concentrated in a band from the lower left to upper right lie in the outer Milky Way. The brightest irregular sources are clouds of hydrogen ionized by luminous stars. Such stars quickly exhaust their nuclear fuel, collapse, and explode as supernovae, whose remnants appear as faint radio rings. Unlike the nearby (less than 1000 light years distant) stars visible to the human eye, almost none of the myriad radio "stars" scattered over the sky are really stars at all. Most are luminous radio galaxies or quasars, and their average distance is over 5,000,000,000 light-years. Radio waves travel at the speed of light, so distant extragalactic sources appear today as they actually were billions of years ago. Radio galaxies and quasars are beacons of information about galaxies and their environs, everywhere in the observable universe, ever since galaxies first formed.