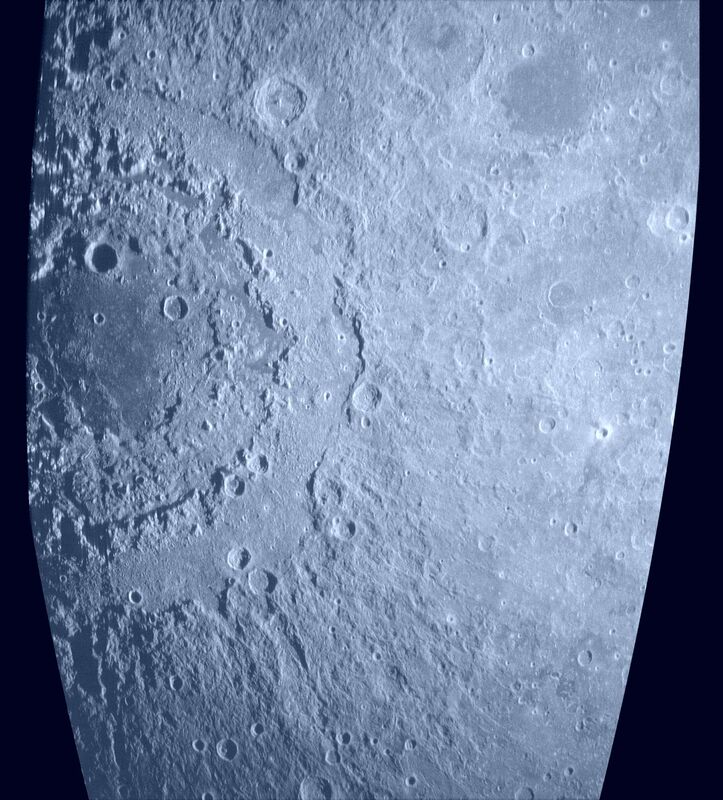 This is a radar image of the Orientale basin, on the western edge of the Moon's Earth-facing side. The area covered is 0-45 degrees S latitude, 60-100 degrees W longitude. Because the Moon wobbles slightly as it orbits the Earth, this image covers up to 7 degrees of the Moon's far side. The image is collected by transmitting a radar signal from the Arecibo Observatory in Puerto Rico, and receiving echoes from the Moon at the Green Bank Telescope in West Virginia. The radar signal has a wavelength of 70 cm, which will penetrate to depths of several meters into the lunar surface. Features as small as 400 m can be distinguished in the full-resolution data; this image has a spatial resolution of 800 m/pixel. Bright areas are due to a higher surface and subsurface abundance of rocks, or to slopes that face toward the incident radar signal (such as crater walls or mountains). Dark areas are typically associated with smooth lava flows that fill large craters and basins on the Moon. These radar maps are being used by researchers at the Smithsonian Institution and Cornell University to study the properties of the Moon's dusty surface layer, or regolith.
Frequency: 430 MHz. Polarization: Opposite-sense circular. No scatter-law or beam pattern correction applied. 6 looks. Fully focused processing. Logarithmic (dB) image scale.