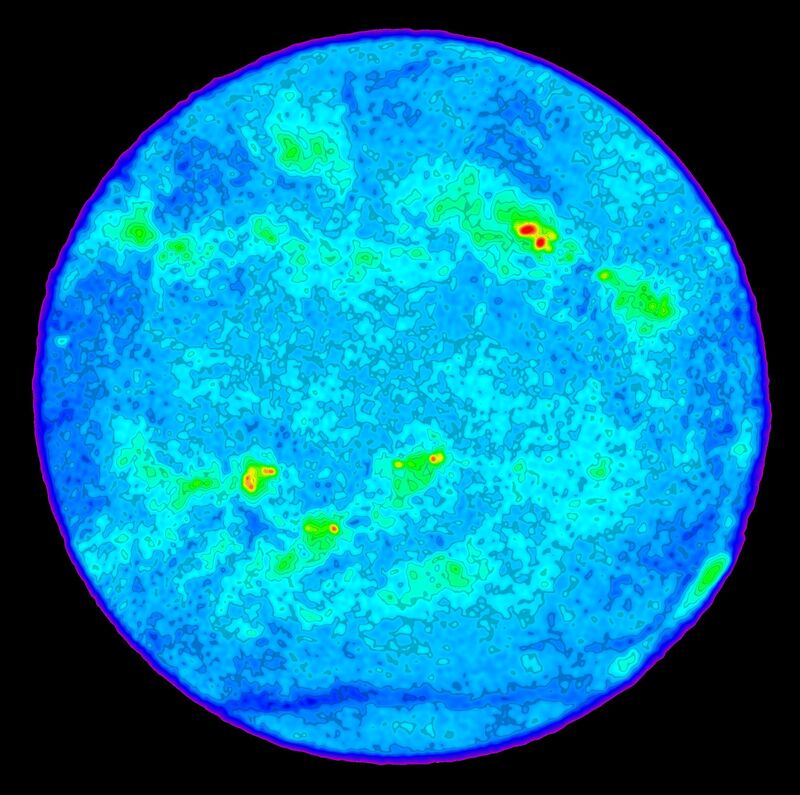 When most people think about the Sun, they usually don't have any idea that it is a strong source of radio waves. The picture shows an image of the full disk of the Sun at a frequency of 4.6 GHz made with the Very Large Array radiotelescope in New Mexico. The resolution of the image is 12 arcseconds, or about 8400 km on the surface of the Sun. The brightest features (red) in this image have a temperature of 1 million degrees (the radio brightness temperature measures a true temperature in the Sun's atmosphere) and show where very strong magnetic fields exist in the Sun's atmosphere. An optical image on this day shows sunspots under these features. The green features are not as hot, but show where the Sun's atmosphere is very dense. The disk of the Sun is at a temperature of 30000 degrees, and the dark blue features are cooler yet. The giant slash across the bottom of the disk in this image is a feature called a filament channel, where the Sun's atmosphere is very thin: it marks the boundary of the South Pole of the Sun on this day. Another interesting feature of the radio Sun is that it is bigger than the optical Sun: the solar limb in this image is about 20000 km above the optical limb.
Since the field of view of the VLA at 5 GHz is about 10 arcminutes while the Sun is 30 arcminutes across, mapping the full disk requires pointing at 23 different locations in D array and then combining the data using mosaicking techniques. The observation consisted of a sequence of 2-minute scans of each subfield lasting over 12 hours. The rotation of the Sun complicates the process of combining the different fields: the center of each field is maintained to be the same point on the solar surface at all times and differential rotation across an individual field is small enough that it does not prevent deconvolution at the nominal resolution. The solar disk is supplied as a default image in maximum entropy deconvolution.

Image courtesy of Stephen White, University of Maryland, and of NRAO/AUI.