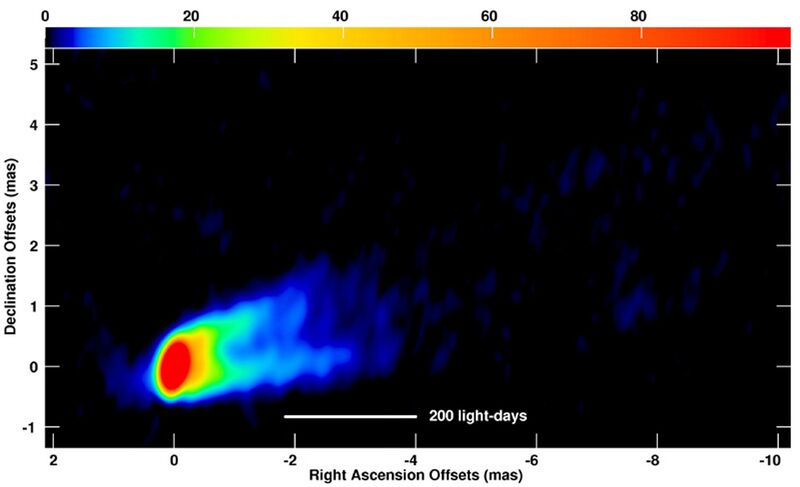 M87, an elliptical galaxy located at the center of the Virgo galaxy cluster, has a jet that is well-studied on arcsec and milli-arcsec scales. Because the jet is bright, the black hole is very massive, and M87 is relatively nearby, this is the best object in which to attempt imaging of the region close to the black hole where the jet is generated and collimated. The figure above is a combined image from five different observations using the VLBA and the Global VLBI Network at 43 GHz. With a high resolution of 430 by 210 microarcseconds (1.3 by 0.64 light-months or at least 100 times better than the Hubble Space Telescope), it reveals that the jet appears brighter at its edge compared to the center, and collimation of the jet is occurring within 100 Schwarzschild radii, which is consistent with previous results by Junor et al. (1999). In addition, the counter-jet may have been detected for the first time. A counter-jet will be important in constraining the geometry of the jet. Proper motions appears to indicate subluminal (below the speed of light) speeds. Student C. Ly acknowledges support through the U.S. NSF Research Experience for Undergraduates (REU) program and NRAO Graduate Research Program.
The above image is an average of five VLBA and Global VLBI observations taken at 43 GHz. The resolution is 430 by 210 microarcseconds or 129 by 63 Schwarzschild radii. The color scale is from 0 to 100 mJy per beam.