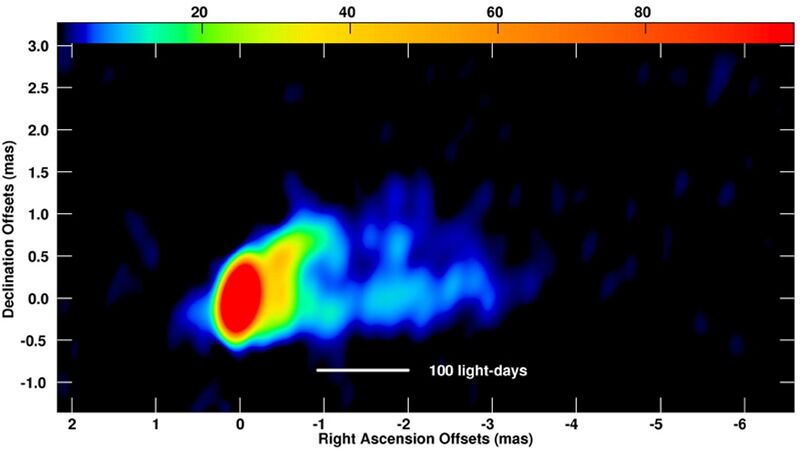 The elliptical galaxy M87 hosts a radio galaxy whose main jet is especially well-studied on arcsec and milliarcsec scales. Prior Global VLBI observations at 43 GHz offered sub-milliarcsec resolution and indicated that the initial jet collimation region extended to at least 0.5 milliarcsec, corresponding to 0.04 pc or 140 times the Schwarzschild radius, Rs, of the massive black hole energizing the radio galaxy. The figure shows the VLBA image of M87 at 43 GHz, with a resolution of 390 microarcsec times 170 microarcsec, which independently confirms the Global VLBI result of collimation over the inner 1 milliarcsec. Moreover, jet emission is detected out to about 3 milliarcsec (0.2 pc or 820 times Rs) along the direction of the larger-scale jet indicated by the arrow in the figure. One difference between the VLBA image in the figure and the Global VLBI image is the presence of a weak counterjet in the VLBA image. Detection of a counterjet would be very interesting, if real. But such structures are also a natural consequence of amplitude calibration errors. Despite considerable testing, the counterjet detection in the VLBA image can only be considered suggestive, not reliable. Student C. Ly acknowledges support at the NRAO by the REU program of the U.S. NSF.