Spinning the Wheel on NGC1052 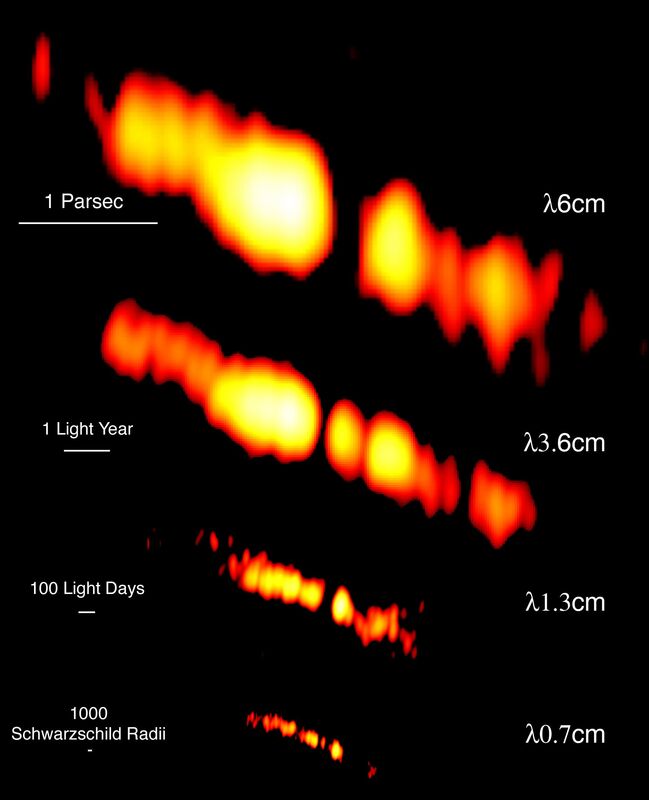 This VLBA image shows the twin-jet system in the active galaxy NGC1052 at four different wavelengths. The brightness increases from red over yellow to white. By spinning the dial on the wavelength, the angular resolution of the image changes from about 3 millarcseconds at 6cm to less than half a milliarcsecond at 7mm observing wavelength. Effectively, this corresponds to a zoom into the center of NGC1052. At 6cm, a circum-nuclear obscuring torus blocks the view towards the very center of the system and causes a prominent emission gap, almost half a light year in size. At smaller wavelength, the source radiation becomes more energetic and penetrates the torus. At 7mm, the apparent gap has shrunk to less than 100 milliparsec. The formation of the jets themselves happens on even smaller scales within a few hundred Schwarzschild radii from the central supermassive black hole.
The VLBA observations were done at four frequencies (5GHz, 8.4GHz, 22GHz, and 43GHz) and recorded with a bit rate of 128Mbps at 2-bit sampling providing a bandwidth of 16MHz per polarization hand (divided in two blocks of 16 0.5MHz channels each). The total integration time was about one hour at 5GHz, 8.4GHz, and 22GHz each, and about six hours at 43GHz, to compensate the lower array sensitivity and the lower source flux density. The color scale starts at 1.5 mJy/beam (red) and all four images are scaled to the maximum of 660 mJy/beam reached at 5 GHz. The four images have been aligned by cross-identification of optically thin jet components at the various frequencies.