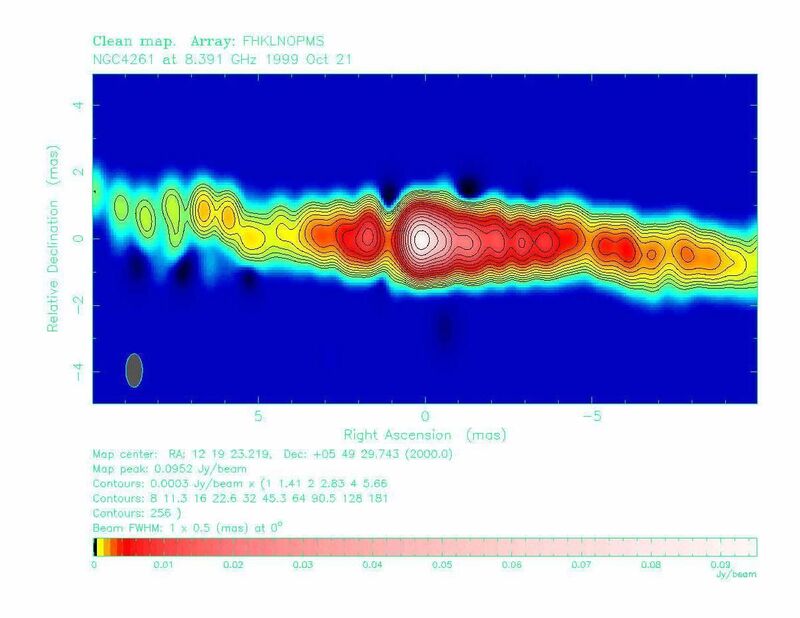 NGC 4261 is an elliptical galaxy containing a 300-parsec scale nuclear disk of gas and dust imaged by the Hubble Space Telescope, around a central supermassive black hole. This VLBA image shows the radio jet on the right, which is pointed slightly toward the observer, and the counterjet on the left, pointed slightly away from the observer. These jets are presumably ejected from regions close to the central black hole, along the direction of the black hole's spin axis. There is a gap in emission on the counterjet side of the core, which can be interpreted as absorption by a small, dense, inner accretion disk. VLBA images at multiple frequencies have confirmed the gap as absorption of radio emission by a geometrically thin disk of ionized gas. This image is one of a series of three images obtained to monitor the depth of the gap and the outflow speed of material in the jet. The depth of the gap stays constant over a period of four years, implying the absorbing material is smoothly distributed. The material in the jet is flowing outward at an apparent speed of 0.5 times the speed of light. From the apparent speed and jet to counterjet brightness ratio the 3-dimensional orientation of the jet has been calculated, and the jet is misaligned by 12 degrees from the HST disk axis. This implies the anglular momentum of the central black hole is slightly misaligned from the axis of the HST disk. Such misalignments can shed light on accretion disk physics and models of massive black hole formation.