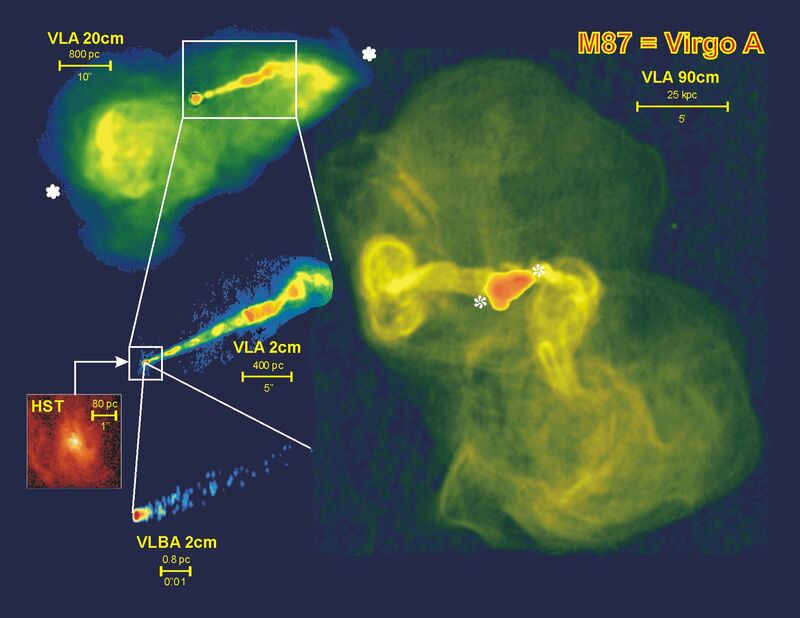 Radio images of the galaxy M87 at different scales show, right, the entire structure of M87; top left, giant, bubble-like structures where radio emission is thought to be powered by the jets from the galaxy's central black hole; middle left, the jets of subatomic particles coming from the core (with an HST inset for comparison); and bottom left, the VLBA image of the region close to the core, where the jet is formed into a narrow beam. The scales of the images are shown by white bars in each image: 10 kpc (kiloparsecs) is equal to 32,600 light-years; 1 kpc equals 3,260 light-years; and 0.01 pc equals 0.0326 light- years, or 2,062 times the distance from the Earth to the Sun. M87's jet is formed within a few tenths of a light-year of the galaxy's core, presumed to be a black hole three billion times more massive than the sun. In the formation region, the jet is seen opening widely, at an angle of about 60 degrees, nearest the black hole, but is squeezed down to only 6 degrees a few light-years away. At the center of M87, material being drawn inward by the strong gravitation of the black hole is formed into a rapidly-spinning flat disk, called an accretion disk. The subatomic particles are thought to be pushed outward from the poles of this disk. The scientists believe that magnetic fields in the disk are twisted tightly as the disk spins and then channel the electrically-charged particles into a pair of narrow jets.