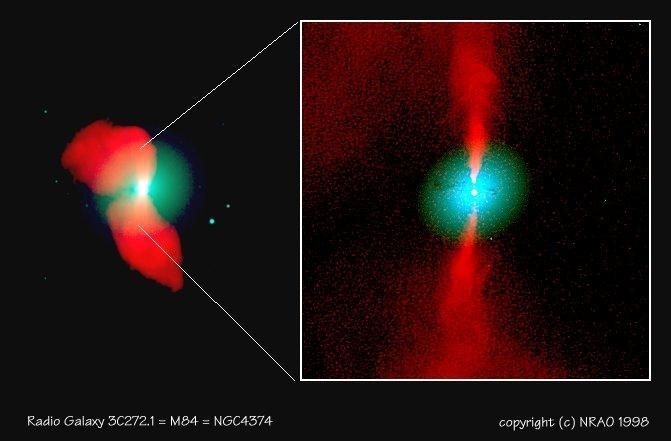 This image shows a double-plumed radio galaxy located in the core of the Virgo Cluster, some 17 Mpc away. The host galaxy is M84, an elliptical galaxy with a dusty nucleus. In this radio/optical overlay, blue-green colors show the distribution of stars and red colors show the radio radiation as imaged by the VLA. The image on the left shows the large-scale morhphology of the radio source and host elliptical galaxy. The overall size of radio source is about 14 kpc. The image on the right shows a close-in view of the nuclues of the elliptical, where the optical image from HST WFPC2 clearly shows the inner dust lane. This image shows that the initial radio jet direction is roughly perpendicular to kpc-scale dust distribution. The radio emission is from relativistic streams of high energy particles generated by the radio source in the center of the radio galaxy. Astronomers believe that the jets are fueled by material accreting onto a super-massive black hole. The high energy particles are confined to remarkably well collimated jets, and are shot into extragalactic space at speeds approaching the speed of light, where they eventually balloon into massive radio lobes.
The left panel is a VLA 4.9 GHz image at 3.9 arcsec resolution on an R-band optical image. The right panel is a VLA 4.9 GHz image at 0.4 arcsec resolution on a HST WFPC2 optical image.