The VLA at Coma 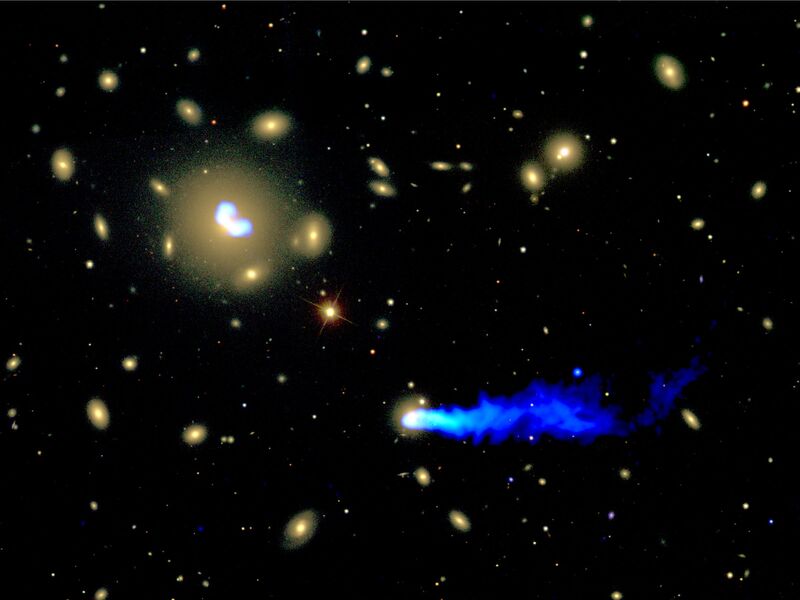 The heart of Abell 1656, the Coma Cluster, is highlighted by spectacular radio emission from NGC4874 and NGC4869. Optical data from the Sloan Digital Sky Survey shows numerous galaxies whose light is dominated by old stars and appears reddish-yellow in the image. Radio emission from the galaxies, shown in blue and captured by the National Radio Astronomy Observatory's Very Large Array, reveals the remarkable activity originating in the massive black holes at the centers of NGC4874 (large galaxy to the left with two compact lobes of radio emission) and NGC4869 (galaxy at lower middle with the dramatic tail of radio emission). Galaxies much farther away than the Coma Cluster generally appear as reddish smudges, although some also harbor active black holes with radio emission like the small blue objects to the lower right of the image.
The optical image is a pseudo-true color image created using Sloan Digital Sky Survey Data Release 5 data, with the g, r, and i filters mapped to the B, G, and R channels. The radio data, depicted in "blue-flame", come from a Very Large Array program which observed a mosaic of 22 pointings in the Coma cluster. Each pointing received a total integration of one hour, producing a final mosaic with an rms noise of around 27 uJy per 4.4" beam and covering about a square degree. This sensitivity amounts to just over 1E20 W/Hz at the distance of the Coma cluster.