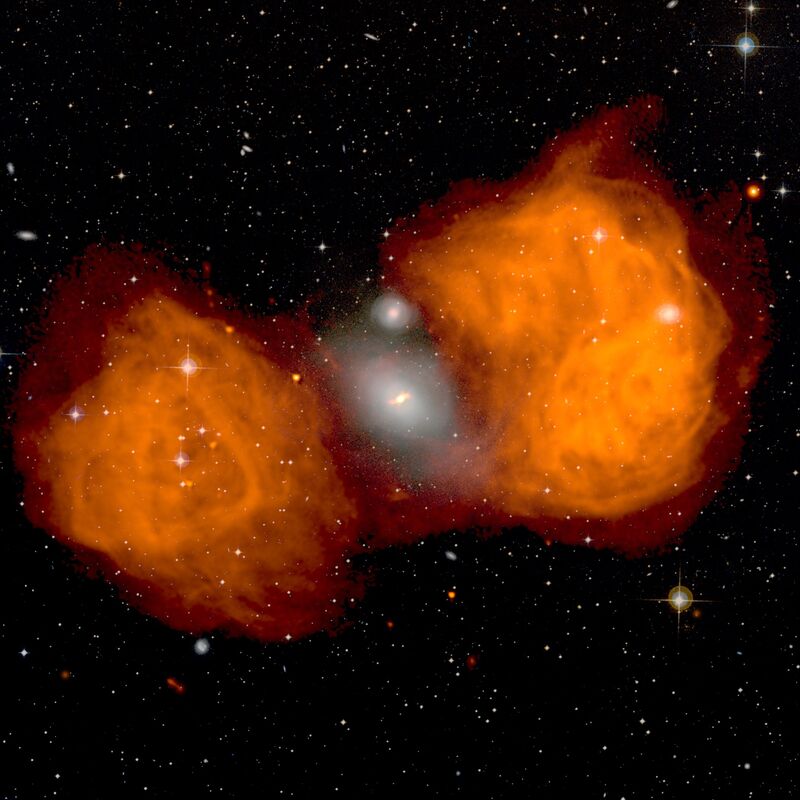 More than 100 million years ago, the giant elliptical galaxy, NGC1316 (center of the image), began devouring its small northern neighbor. The complex radio emission, associated with this encounter (called Fornax A, shown in orange) was imaged using the Very Large Array in New Mexico. This image shows the radio emission superimposed on an optical image (STScI/POSS-II). The radio emission consists of two large radio lobes, each about 600,000 light years across. As NGC 1316 cannibalizes the smaller galaxy, it strips away material that spirals toward a black hole at the center of the giant elliptical, which produces rings and asymmetries in NGC 1316. Friction from the in-falling matter generates a ten-million-degree plasma surrounding the black hole that emits an enormous amount of light and x-rays. By a magnetic focusing mechanism, not yet understood, high-energy particles are ôbeamedö away from the hot plasma in opposite directions û faint radio leakage (shown by the short, orange jets near the galaxyÆs heart) hint at this process. The flow of material is essentially invisible until the particles smash into tenuous material some 500,000 light years from the galaxy, producing the strong, orange radio-emission. Slow changes in the ôbeamÆsö direction as well as the dynamical influence of the cosmic magnetic field produce the intricate patterns we see in the radio lobes. These patterns have persisted over tens of millions of years. At the time of this writing (2005), the center of NGC1316 is being imaged at high resolution with the Very Large Array and the Chandra X-ray Observatory. These observations will help us better understand the interaction between the hot gas and the formation of the beam near the black hole.