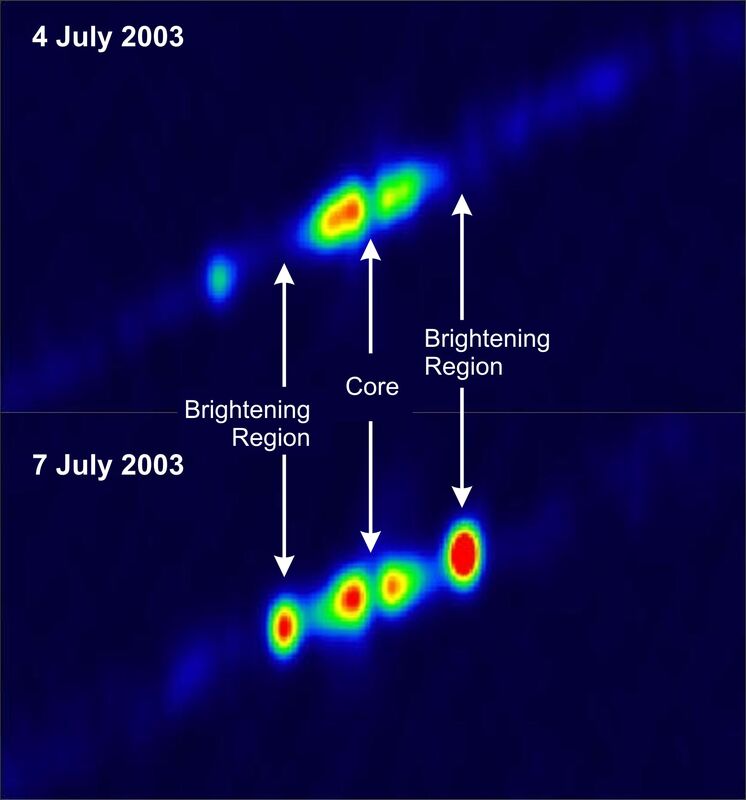 SS433 is a binary star system in the constellation Aquila, consisting of an early type star and a compact object (neutron star or black hole). Material from the normal star is falling toward the compact object. This accretion is frequently associated with a collimated jet outflow moving at a substantial fraction of the speed of light. SS433 is unique in showing extremely large Doppler shifts in both optical and X-ray spectral lines. These lines originate in material in the jets moving at velocities of about 26% of the speed of light. The relativistic jets are also seen directly in radio observations. The above images are just two of a total of 39 observations made of SS433 over 42 days (June 26 through August 6, 2003). These VLBA images have a spatial resolution along the jet of ~7 milliarcseconds (7 times better than the Hubble Space Telescope), corresponding to ~35 Astronomical units at a distance of 5 kiloparsecs (i.e., roughly the size of the solar system). One interesting result is the brightening regions, which is shown in these two images. Blobs of material move out and brighten some distance from the core.
These images are 2 of the 39 two-hour observations of SS433 spread over 42 days (June 26 through August 6, 2003), covering roughly 1/4 of the 162 day precession period. These VLBA data were taken at 1.5 GHz. The beam size was 16x7mas at 0 degrees.