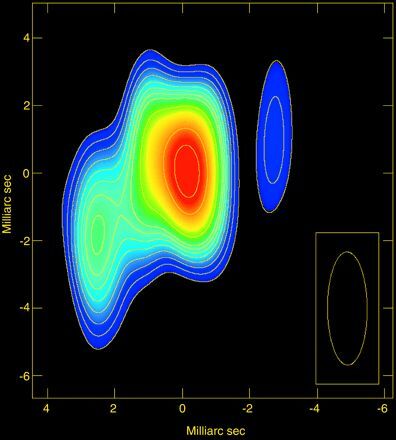 LS 5039 is a high mass X-ray binary (HMXB) in our Galaxy, at a distance of 10000 light years from the Sun. It is located in the constellation of Scutum. This radio image of LS 5039 shows the presence of radio jets emanating from a central core in this HMXB, revealing its microquasar nature. Astronomers think that microquasars behave as scaled down versions of the distant quasars not only in the morphology of the source (jets) but also in the physics involved. Only around 10 microquasars have been discovered up to now and, of course, statistical studies are not yet possible. Hence, it is important to increase the number of sources of this kind. On the other hand, most of the previous discoveries were possible because the sources experienced X-ray bursts that were detected with satellites orbiting around the Earth. On the contrary, LS 5039 was proposed to be a microquasar candidate after comparing source catalogs at different wavelengths (radio, optical, X-rays). Confirmation of its nature came from the VLBA+VLA image shown here. The success of this approach for systematic identification opens the possibility of new findings which may confirm that the microquasar phenomenon is not as rare as it seems. Finally, LS 5039 may also be associated with the gamma-ray source 3EG J1824-1514, discovered by the Energetic Gamma Ray Experiment Telescope on board the COMPTON-Gamma Ray Observatory satellite.