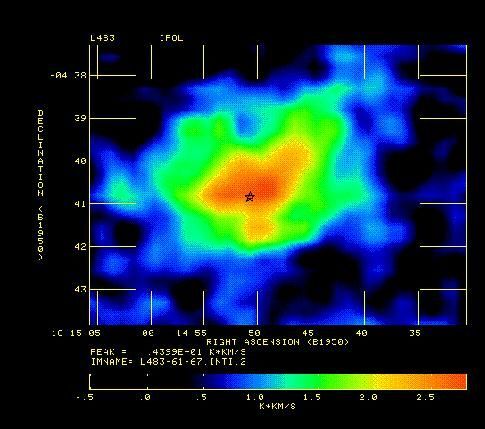 This image shows optical and radio views of The L483 Molecular Cloud. The top panel is an infrared image (in the `J' band at 1.2 microns) in which the dark cloud L483 stands out against a Scutum starfield. Deep within, a purple glow locates one lobe of a flow emanating from the densest part of the cloud, completely hidden from view at even the longest infrared wavelengths accessible from the Earth's surface. At these wavelengths, we could never peer into the cloud and uncover the mechanisms of star formation. Radio techniques remedy this situation. Image courtesy of Gary Fuller. The bottom panel shows an image of radio emission taken by the NRAO 12m radiotelescope. Here the interstellar gas glows with emission from the carbon monoxide molecules, which, mixed with dust, completely obscured the star-forming interior of the cloud in the previous image. Note how the gas glows most brightly where accretion onto a protostar warms the cloud. Only a dozen or so objects in the sky are thought to be as young as this protostar, which appears to be growing into a young star of about the same mass as the Sun. At this stage in its evolution, however, most of the matter which will eventually be incorporated into the star and its planets still lies in the surrounding cloud. Thus the L483 protostar offers us a chance to understand how interstellar gas and dust clouds form stars and planets.
Bottom panel radio emission is C18O J = 1 --> 0