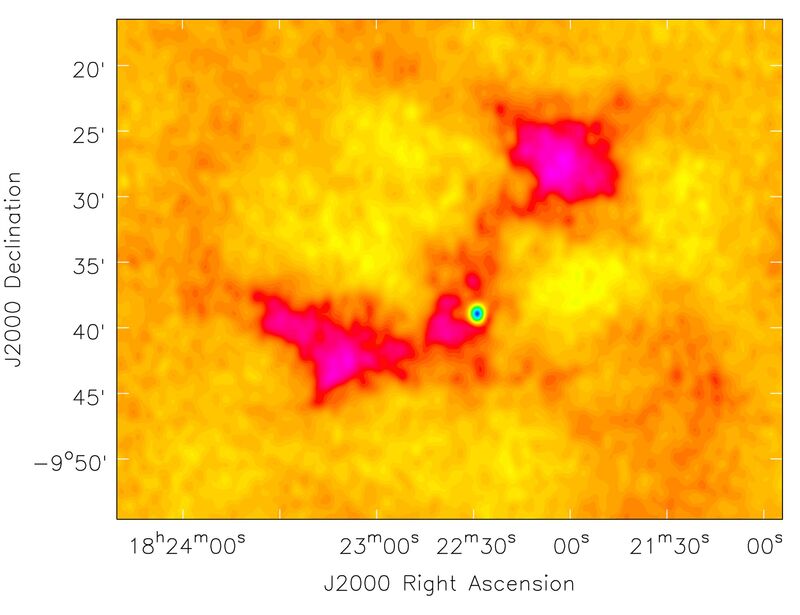 Since 2002 hundreds of HI (neutral hydrogen) clouds have been discovered with the help of the new unique NRAO instrument -- 100 m Green Bank Telescope (GBT). These clouds are a completely new class of objects presenting a previously unknown phenomenon of the interstellar matter physics. Several brightest of them have been observed with another NRAO instrument, Very Large Array (VLA) which provides better angular resolution. This image shows a VLA HI column density map of one of such clouds (G21.2+2.2). It can be estimated that this cloud is about 8 kpc away from us and 300 pc above the Galactic plane. Its width chnages from 15 to 30 pc. This cloud contains 1350 solar masses of hydrogen and its density reaches more than 10 atoms per cubic cm. This cloud is special because there is a bright continuum source located behind it (seen here as a "rainbow bull's eye"). Measuring how the cloud absorbs its radiation allows to understand more about the cloud's physics. The image is a false-color one with blue corresponding to the lowest "negative brightness" due to absorption, yellow - to zer background (no hydrogen) and red -- to normal cloud's HI emission. This allows to visualize how strong is the absorption.
The resolution of the image is 1 arcmin (taken in VLA D-array), exposure is a few hours. It is integrated over all the cloud's linewidth. Cloud's peak column density is 4.2x10<sup>20</sup> cm<sup>-2</sup> and the line's FWHM is 4.6 km/s. Distance is estimated assuming the cloud resides at the tangent point. The absorption source is (J2000) 1822-096 with flux of 5.2 Jy. The absorption experiment allowed to measure cloud's opacity of 0.07 and spin temperature of 150 K. A comparison to the thermal linewidth has shown that the cloud contains little turbulence. The lower imaging limit for this image has been chosen at the "bottom" of the absorption feature.