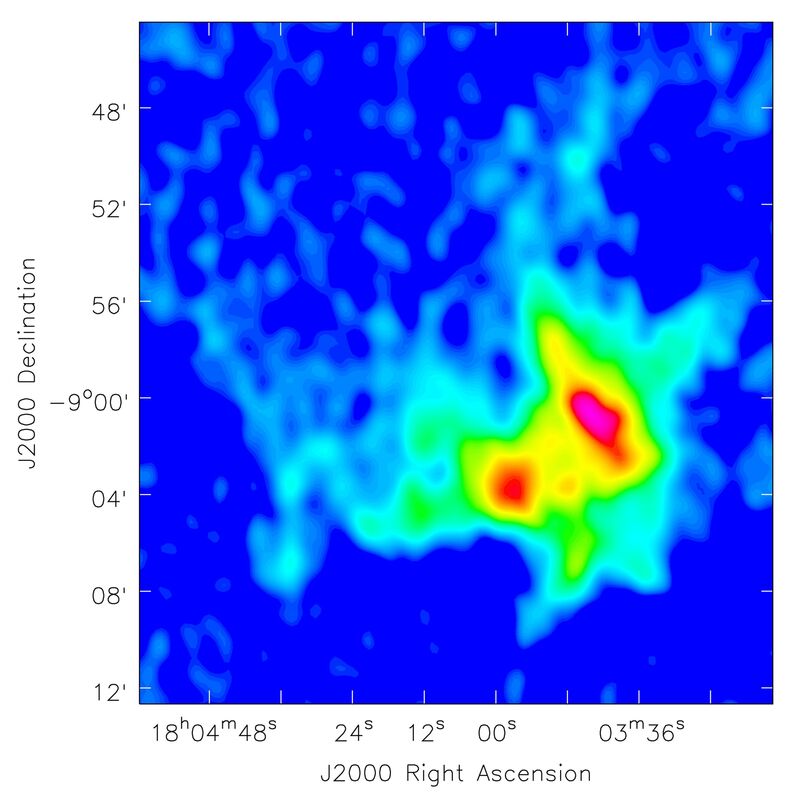 Since 2002 hundreds of HI (neutral hydrogen) clouds have been discovered with the help of the new unique NRAO instrument -- 100 m Green Bank Telescope (GBT). These clouds are a completely new class of objects presenting a previously unknown phenomenon of the interstellar matter physics. Several brightest of them have been observed with another NRAO instrument, Very Large Array (VLA) which provides better angular resolution. This image shows one of such cloud's (G19.4+6.3) VLA HI column density map. It reveals that the cloud has a "dense core - diffuse envelope" structure. The assymetry of the envelope might also suggest a sideway motion. It can be estimated that this cloud is about 8 kpc away from us and 900 pc above the Galactic plane. Its size is approximately 30 pc with core size of about 10 pc. This cloud contains 800 solar masses of hydrogen and the density of its cores exceeds 20 atoms per cubic cm. The images are false-color with blue corresponding to the least and red -- to the most hydrogen density.
The image resolution (taken in VLA D-array) is 1 arcmin, exposure is a few hours. Cloud's peak column density is 4x10^+20 cm^-2 and the line's FWHM is 4.4 km/s, as measured from the VLA data. Distance estimated assuming the cloud resides at the tangent point.