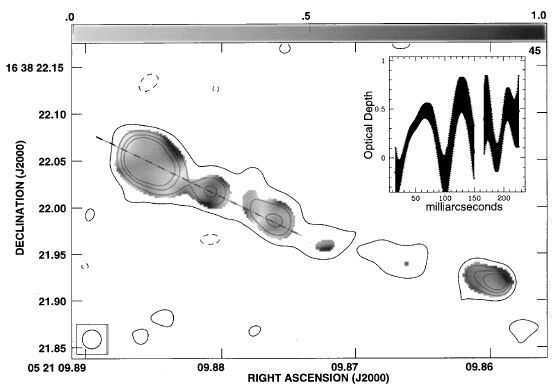 The interstellar medium (ISM) is the thin, cloud-like material found between the stars. Composed mainly of neutral hydrogen (HI), helium, and dust (heavier atoms and molecules left over from ancient novae and supernovae), this material is difficult to observe because it is cold and doesn't give off visible light. It does, however, glow in the radio regime of the electromagnetic spectrum. The ISM also absorbs radio energy emitted by other objects. If we are in a direct line with an ISM cloud and a radio source behind it, we can use this absorption to map the structure of the cloud, in much the same way you can use a flashlight in a darkened room to see the structures inside your hand. This image was formed using the distant quasar 3C138 as the "flashlight". Radio emission from the quasar was absorbed by the interstellar medium in the direction of the constellation Leo. Variations in grey scale of the image correspond to differences in opacity or density of the cloud. The Very Long Baseline Array is an ideal instrument for this observation because it provides the high resolution required to see small details within the cloud, such as filaments, sheets, or areas of very high density. Extremely thick regions in the ISM can become the birth place of new stars and planets.
Angular resolution of the image is 20 milliarcsec. HI optical depth variations are up to a factor of 2. If the opacity variations are due to fluctuations in density, the data suggest high-density structures (~1E6 atoms/cm**3) in the cold neutral medium on physical scales less than 10 AU.