Deflected Jet of a Protostar 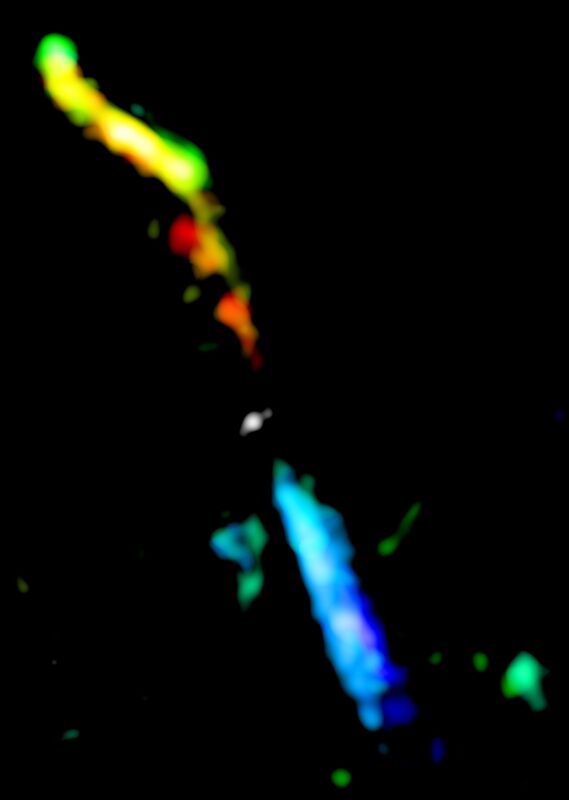 Protostars, or embryonic stars in the process of accumulating mass, often make their presence known by ejecting materials at highly supersonic speeds, which is usually observed as bipolar jets. NGC 1333 IRAS 4A (gray object near the center of the image) is one of the youngest and brightest protostars and will become a sun-like star in a few million years. It is deeply embedded in a dark molecular cloud at a distance of 1000 light years in the constellation of Perseus. The highly well-collimated bipolar jet of IRAS 4A was imaged in the radio emission line of silicon monoxide(SiO) using the Very Large Array (VLA). SiO is an excellent tracer of shocked molecular gas. This image shows two prominent jets: one flowing from the protostar toward the northeast (upper left) and its counter-jet flowing toward the southwest (lower right). The color scale of this image represents the line-of-sight velocity: gas approaching to us is in blue, gas at the same velocity as the protostar in green, and gas receding from us in red. The southwestern jet is flowing along a straight path, which is typical of protostellar jets. In contrast, the northeastern jet shows an extraordinary bend in the middle of the flow. Comparison of the SiO image with maps of ambient cloud suggests that the northeastern jet may be colliding with a dense cloud core and deflected as a result. The outflowing gas is shocked and heated as a result of the collision, and the deflected jet glows brighter than the incident jet. The deflected jet is also very turbulent and can be seen in a large range of colors: red, orange, yellow, and green, while the southwestern jet is seen mostly in blue. Such a sharp deflection of protostellar jet is very rare and helps us better understand the interaction between the material ejected by protostars and the ambient cloud around them.
The color image of the SiO v=0 J=1-0 (43.4 GHz) line was made from the data taken with the VLA in the D-array configuration. The angular resolution is 2.0 arcseconds. Seven velocity-channel maps were generated: from V(LSR) = -8.1 to 20.2 km/s with a channel width of 4.7 km/s. Different values of hue were assigned to them: from 240 (blue) to 0(red), decreasing by 40. Then the channel maps were combined to generate the multi-color image of the SiO outflow. The gray image near the center is the K-band (1.3 cm) dust continuum map of the IRAS 4A protobinary system. The data were taken with the VLA in the C-array configuration, and the angular resolution is 1.0 arcsecond.