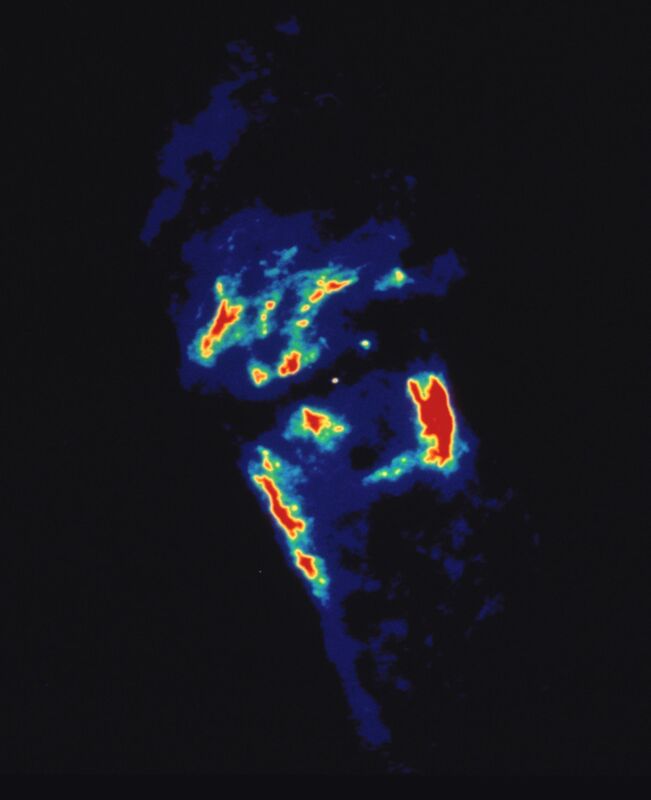 The 6 cm radiograph shows the bipolar HII region S106 (SH 2-106) which is illuminated by a recently formed BO star. The star is still partially buried in its placental molecular cloud as shown by 2.6 mm carbon monoxide observations. Three noteworthy features of the radio image: (1) The exciting star is visible as a point radio source since it has a powerful, ionized stellar wind. (2) The star is located in the middle of a radio shadow, a 3" x 20" region free from ionized gas. This feature of the map indicates the presence of a disc or ring of circumstellar material located in the line of sight which blocks all ionizing ultraviolet photons in its equatorial plane. Gas lying in the shadow of this ring cannot be ionized by stellar UV photons, hence it does not emit radio waves. Since UV photons scattered from the HII region also do not appear capable of ionizing this region, we conclude that the "radio-shadow" must be occupied by dense neutral gas with n > 10^5 cm^ -3. Supporting evidence for a large scale neutral disc seen edgeon surrounding the exciting star can be found in high resolution mm-wave maps of the distribution of molecular gas and in formaldehyde (H2CO) absorption maps made at the VLA. The inner edge of the disc lies within 0.1" (~7 x 10^14 cm < 30 A.U.) of the star since the strong ionization front expected at the inner edge is hidden within the stellar wind at lambda=6cm. (3) The structure of the large scale HII region shows numerous clumps and filaments and a systematic supersonic expansion of the plasma away from the exciting star. The kinematics and morphology of the nebula suggest that the dynamics of the gas are dominated by the powerful wind blowing from the central star.
Observing runs - 1981 February 8 and December 12 at the VLA in A- and C-configurations, using 27 antennas.