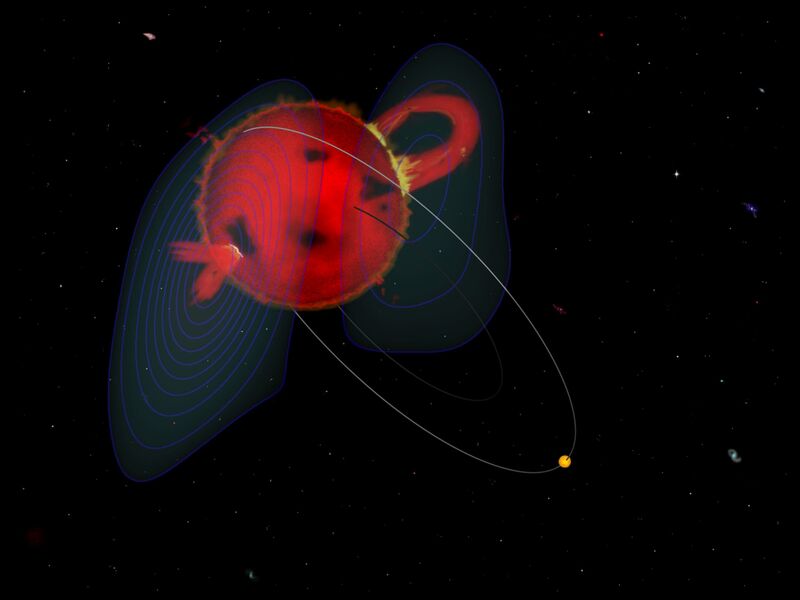 A radio image of IM Pegasi superimposed upon an artist's depiction of the star system. IM Pegasi is a binary star system located about 300 light years from Earth in the constellation Pegasus. The system consists of a red giant star about 13 times the size of the Sun, and a much smaller yellow dwarf star comparable in both size and color to the Sun. The red giant star is several thousand times more active than the Sun and thus has large dark star spots which cover a significant portion of its surface. The two stars of the binary orbit each other about their mutual center of mass. The orbital path of the primary is indicated by the dark grey line and that of the secondary by the light grey line. The radio image, outlined by the faded blue contour lines, traces charged particles accelerated in energetic, magnetic events near opposite sides of the visible surface of the giant star. The precise alignment of the radio image with respect to the giant star is conjectural. IM Pegasi is the guide star for the NASA/Stanford Gravity Probe B mission.
The contours (and light green hue) represent an 8.4GHz (3.6cm) phase-referenced VLBI image of IM Pegasi (HR8703), the guide star for the NASA/Stanford Gravity Probe B mission. The image was produced from data acquired over a 16 hour period on 18/19 September 1999. The observations were made using a global array of radio telescopes including the ten VLBA antennas, the phased VLA, the 100-m Effelsberg antenna, and the three 70-m NASA/JPL DSN antennas. The resolution of the VLBI array is approximately 0.6 mas in the horizontal, i.e., east-west, direction. The separation of the peaks of the radio lobes is approximately 1.5 mas. The contours displayed in the radio image are drawn at 5%, 10%, 20%, 30%, 40%, 50%, 60%, 70%, 80%, and 90% of the peak brightness of 13.0 mJy/beam. The dynamic range of the image is 170:1. IM Pegasi is an RS CVn binary system consisting of a giant primary and dwarf secondary. An artist's depiction of the binary system is included in the background of the radio image. The illustrated orbits of the primary star (spotted and red) and secondary star (yellow), indicated by the dark grey and light grey lines, respectively, are approximations to the actual orbits. The sizes of the primary and secondary stars are each inferred from optical spectroscopic and photometric observations (Berdyugina et al. 1999; Lebach et al. 1999). The precise alignment of the radio image with respect to the primary star is conjectural.