The Corpse of a Star 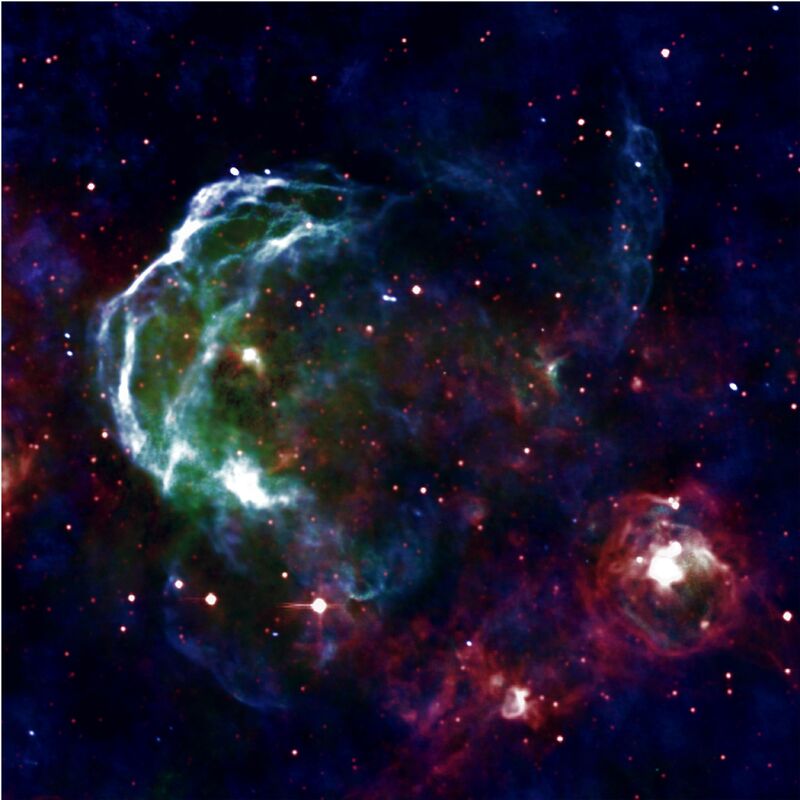 This shell of hot gas is the remains of a star which exploded around 30,000 years ago. It is thought to be the remnant of a core-collapse supernova, which occurs when a star runs out of fuel for nuclear fusion, collapses under its own weight, and then rebounds, producing a shock wave which rips outward through the surrounding material. Even though it is located over 6000 light years away, at peak brightness, the supernova would have been visible during the daytime to our ancestors on Earth. The shock front can clearly be seen in this image as the blue-green structure, visible in radio waves from the Galactic Plane Survey (a survey of our Milky Way Galaxy undertaken by the Very Large Array radio telescope; the image also contains infrared data from the MSX satellite, shown in red). In the 30,000 years since the explosion, this shock has reached over 60 light years away from its parent star (and slowed down to "only" 70,000 miles per hour), sweeping up surrounding gas, and enriching our Galaxy with heavy elements. The deaths of similar stars eons ago in our Sun's neighborhood seeded our solar system with the material necessary for life to begin.
Supernova remnant W 28, at a distance of 1.9 kpc, is thought to be the remains of a Type II supernova which is driving shock waves into surrounding molecular clouds. Warm dust emission is seen in red (MSX 21 micron image), while the synchrotron radiation from the SNR is clearly visible in the radio images (data from the VLA B+C+D Array Galactic Plane Survey data; 20 cm in green and 90 cm in blue). The 20 cm data (resolution 2 arcsec) has been resampled to match the resolution of the 90 cm data (6 arcsec). The MSX resolution is about 20 arcsec.