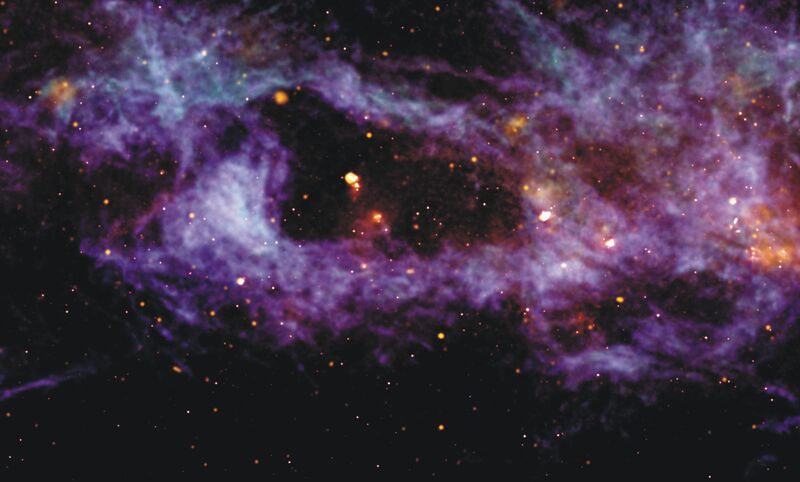 What appears to be the hole of an elongated smoke ring in this National Radio Astronomy Observatory image really is an enormous, nearly empty, bubble blown into the dusty, gas disk of our Milky Way Galaxy. Such interstellar bubbles are sculpted by the force of the wind and radiation from typically a few dozen hot, massive stars along with the explosive impact of dying stars which are called supernovae. The force sweeps up the disk's gas that is in its path, creating a gas shell surrounding a bubble. The neighbourhood of our own solar system resides in such a cavity. However the shell in this image, catalogued (using its coordinates) as galactic shell GS 62.1+0.2-18, is located at a distance of 30,000 light years from Earth, and measures 1,100 by 520 light years. Despite its distance, this "smoke ring" appears so large on the sky that the apparent width of the full moon would fit eight times inside it. The bright yellowish-orange dots scattered across this image are clusters of young, massive stars surrounded by hot gas and are called nebulae. Astronomers from the International/VLA Galactic Plane Survey have determined that none of these clusters harbor the stars that blew the giant shell since none of the clusters are at the same distance as the shell. Indeed they all are located closer to the Earth than the shell is. Probably, the stars that blew GS 62.1+0.2-18's hole perished as supernova explosions. This image shows only a small part of a survey which uses both the Very Large Array and the Green Bank Telescopes to trace, in detail, the cool gas in our Galaxy. This gas has been coloured purple, blue and green in this image. In order to show the locations of star clusters, the image of gas was overlaid with 2 additional images. The one of radio emission associated with regions of hot gas was coloured orange, while heated dust, imaged in infrared by the Midcourse Space Experiment satellite, was coloured red. The Principal Investigator for the survey is A. R. Taylor. This study is published by VGPS investigators J. M. Stil, A. R. Taylor, J. M. Dickey, D. W. Kavars, P. G. Martin, T. A. Rothwell, A. I. Boothroyd, Felix J. Lockman, and N. M. McClure-Griffiths in the Astronomical Journal, Volume 132, number 3, page 1158.
The HI and continuum images shown here were obtained with the Very Large Array, in its D configuration, and the Green Bank Telescope as part of the VLA Galactic Plane Survey (VGPS). The VGPS is a 21-cm HI line and continuum survey that covers the Galactic plane from longitude 18 degrees to 67 degrees, and latitudes at least between -1.3 and +1.3 degrees. In total, the VGPS took 260 hours of observating time on the VLA, divided over 990 fields. The total survey required about 3000 observations. The VLA observations were aquired July 23 to September 30 2000; the GBT observations were acquired November 2002 to August 2003. The image displays an area of the Galactic plane of approximately 6 degrees by 4 degrees. The angular resolution is 1 arcminute, and the sensitivity is 1.8 Kelvin per 0.824 km/s channel. The image shows a combination of three HI channels at LSR velocities -19.6 (assigned the colour blue), -22.07 (purple), and -24.55 (green) km/s, as well as the 21-cm continuum image and an archival MSX 8 um image. The radio continuum image revealing the non-thermal emission from supernovae was assigned the colour light-orange while and the 8um image of the thermal emission from HII regions was assigned red, producing yellowish-orange nebulae when these 2 images are combined.

Jayanne English (U. Manitoba), Jeroen Stil and Russ Taylor (U. Calgary) and MSX