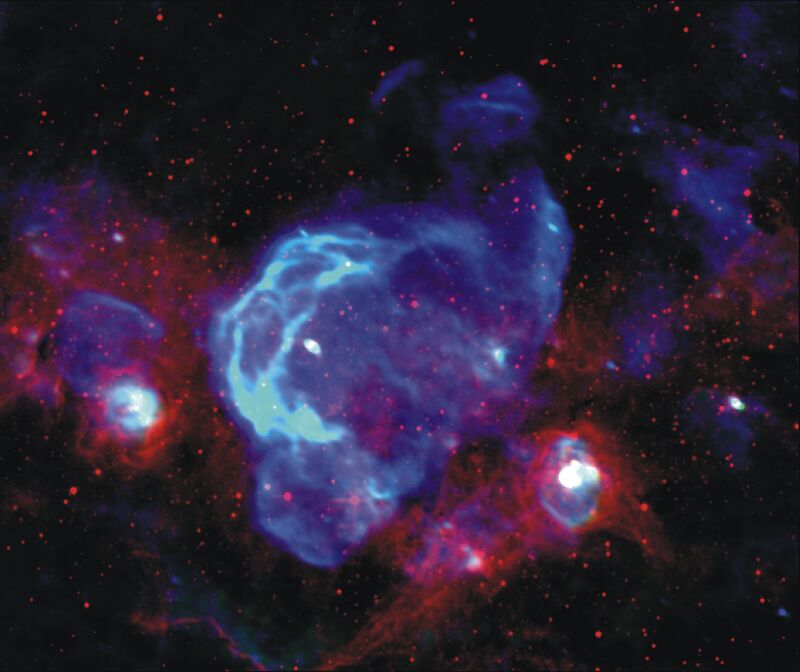 This is a 3-color image of the region surrounding the W28 supernova remnant (SNR) that is located in our Galaxy. In this image blue=Very Large Array (VLA) 90cm, red=MSX 8 microns, and green=Southern Galactic Plane Survey + VLA 20cm data. This image was created to look for new supernova remnants through their non-thermal (synchrotron) radio emission. Non-thermal sources in these images are primarily blue in color, while massive star forming regions composed of thermal ionized hydrogen gas are white to cyan; warm thermal dust emission is red. Including W28, two SNRs were previously known in this field of view, six new SNRs were discovered from this image.
The VLA 90cm data is composed of B, C, and D configuration data and has a resolution of 42" (Brogan et al. 2006). The combined Southern Galactic Plane Survey (McClure-Griffiths et al. 2005) and VLA (Helfand et al. 2005) 20cm data has a resolution of 70" x 37". The MSX 8 micron data has a resolution of 20" (Price et al. 2001).