Dance of the Radio Galaxies 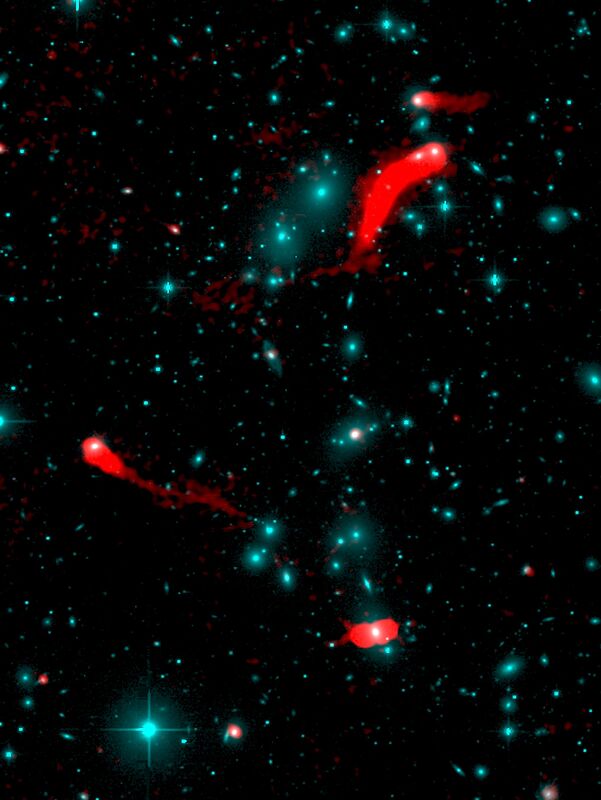 Four radio galaxies perform a complicated dance in the heart of Abell 2255, a rich cluster of galaxies in the throes of a cluster-cluster merger. The optical image, collected at Kitt Peak National Observatory, is displayed in blue and reveals numerous galaxies in a chain-like structure. The NRAO Very Large Array was used to obtain the radio data, which are shown in red. The prominent radio galaxies include three sources in which twin jets of radio-emitting plasma are swept back into a single tail by motion relative to the diffuse gas which permeates the cluster itself. Also visible are numerous fainter galaxies with associated radio emission. In many cases, these are starbursts likely instigated by the dramatic environment.
The optical image was obtained at KPNO using the 0.9m with the Mosaic CCD. The original pixel scale was 0.68" with seeing of about 1". The radio image is the result of numerous pointings combined in a mosaic. It corresponds to both B and D array VLA data, each at 1.4GHz. Exposure times per pointing were about 20 minutes (B array) and 10 minutes (D array), resulting in a net rms noise in the final mosaic map of under 40 uJy/beam.