M33 in Radio and Optical 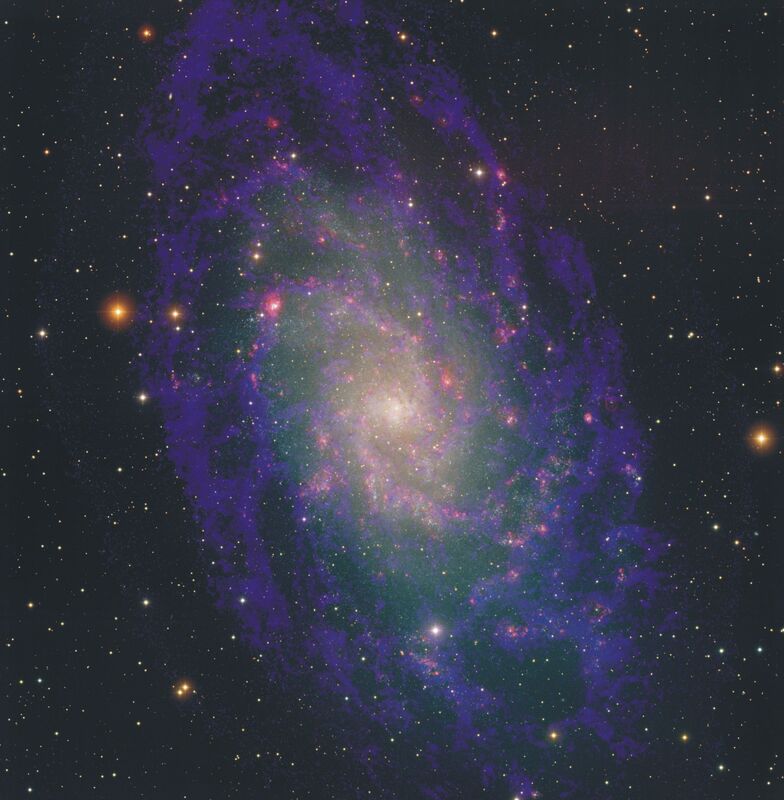 This image of the Triangulum Galaxy was created by combining optical data from the National Science Foundation's 0.9-meter telescope on Kitt Peak in Arizona with radio data from the National Science Foundation's Very Large Array (VLA) telescope in New Mexico and the Westerbork Synthesis Radio Telescope (WSRT) in the Netherlands. Also known as M33, the Triangulum Galaxy is part of the Local Group of galaxies, which includes the Andromeda Galaxy (M31) and our galaxy, the Milky Way. M33 is over thirty thousand light years across, and more than two million light years away. The optical data in this image show the many stars within the galaxy as well as reddish star forming regions that are filled with hot Hydrogen gas. The radio data reveal the cool Hydrogen gas within the galaxy, gas which cannot be seen with an optical telescope. Combined together, the radio and optical give a more comprehensive view of star formation in this galaxy. The color image was generated by combining images taken with the 0.9-meter telescope through four filters (B, V, I and Hydrogen-alpha) and 21cm neutral Hydrogen data taken with the VLA and WSRT (shown in blue-violet). The image is one square degree in field of view, roughly five times the size of the Moon. A very high resolution (8107 x 8270 pixels) version of this image is available on request.
The radio data were obtained from VLA observations taken both in its B-array and CS-array configurations, with a spatial resolution of 10" and velocity resolution of 1.3 km/s. The VLA data have been supplemented by total power observations obtained at the Westerbork Synthesis Radio Telescope.