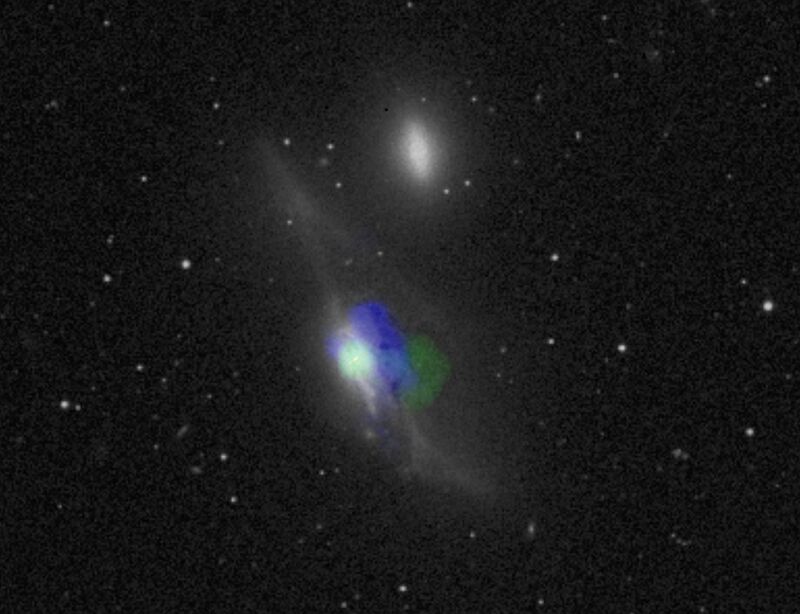 The galaxy NGC4438 in the Virgo cluster of galaxies seems to be undergoing a terrible time. The northern early-type galaxy has interacted with it in the past and has severely disturbed the stellar disk(shown in white light from Digitalized Sky Survey). Such galaxy interactions are believed to trigger AGN activities feeding gas to the supermassive blackholes. VLA radio image at 5GHz shows (in red) the radio jet from this young AGN is creating two lobes at the very centre of the galaxy. But the food from this blackhole monster is probably being snatched away, causing its recent starvation. As seen in the VLA image the neutral atomic hydrogen gas (seen in blue) of this galaxy is shifted to the west of the main disk and the spiral arms have almost no gas. It is also seen in the GMRT image at 617MHz that the old relativistic plasma (in green) of the galaxy is shifted to the west. Such displacement of gas can occur due to the interaction with the northern galaxy or a phenomena called ram pressure stripping. As NGC4438 moves at a velocity of nearly 1000 km/s through the million degree kelvin hot gaseous medium of the Virgo cluster the gas of the galaxy gets pushed backward. Gradually gas lost from a galaxy disk, like this, will affect the formation of stars in the disk and galaxy can in turn evolve to a galaxy of different type. NGC4438 is a nearby and nice example of the severe affects cluster galaxies undergo and evolve.
Telescope VLA, D array, archival data for the mom-0 HI image, shown in blue Telescope GMRT, own observations, 617 MHz radio continuum, shown in green DSS, optical image, shown in grey scale Telescope VLA B array, 5GHz archival data, showing central AGN lobes in red.