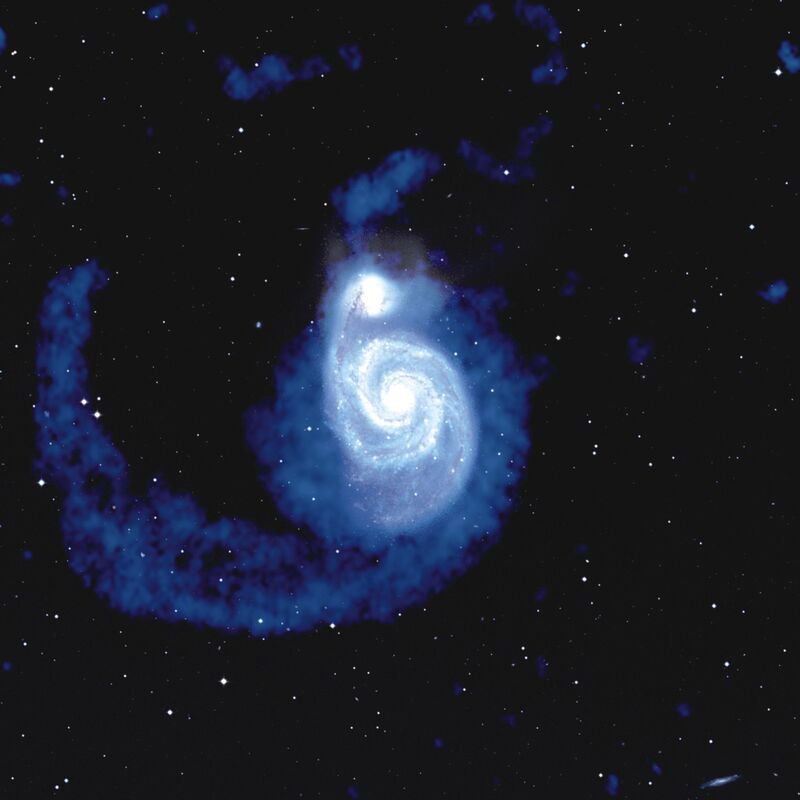 This image of the spiral galaxy M51, also known as the "Whirlpool Galaxy," and its companion NGC5195 combines observations of neutral Hydrogen emission obtained with the Very Large Array with optical images (R, B) from the Second Palomar Observatory Sky Survey - STScI Digital Sky Survey. The optical data show the emission of stars in these galaxies as well as the dust; the latter can be seen as dust lanes in the spiral arms of M51 itself and in obscuring the eastern (left hand) part of its companion, NGC5195. They also show foreground stars in our own Milky Way galaxy as well as some background galaxies. The spectral-line observations of neutral atomic hydrogen (depicted by bluish hues) yield the distribution, as well as the kinematics, of the neutral Hydrogen gas. The long tidal tail of neutral Hydrogen was shaken loose by the dance of these two galaxies.
The 21cm spectral-line observations were obtained with the VLA in B, C and D configurations and reduced separately by the observers to produce high-resolution (B, 8 arcsecond) and a low resolution (C+D, 15 arcsecond) images. These images were combined with some smoothing done to the edges of the higher resolution structures to merge them into the low-resolution image. This image was made for illustration purposes only and should not be used for quantitative research. The original HI images can be obtained from the observers or remade from the data in the VLA archive.