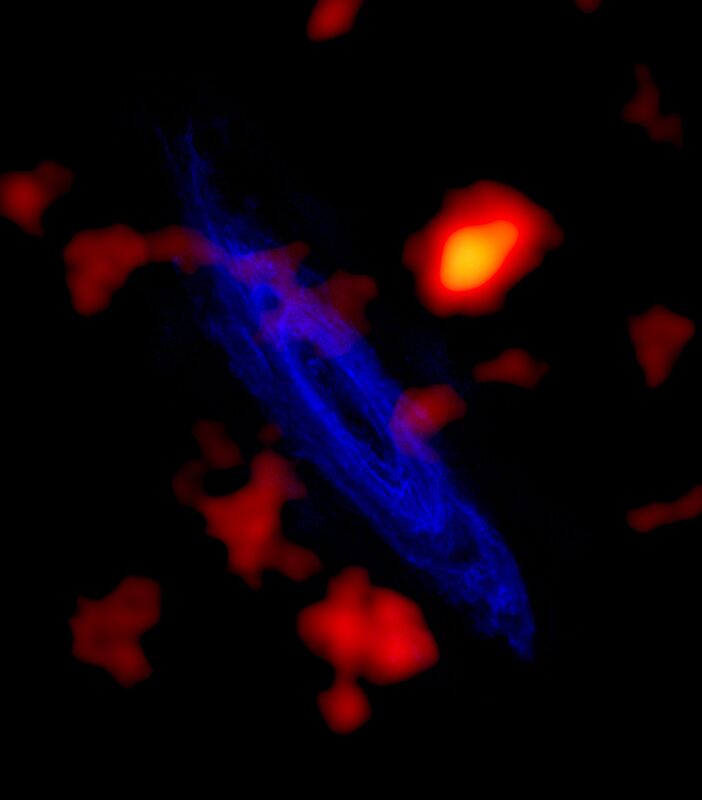 Green Bank Telescope 21 cm observations have revealed a faint, yet extensive atomic hydrogen (HI) cloud population surrounding the Andromeda galaxy (M31). This image depicts several long-sought galactic "building blocks" in orbit of the Andromeda Galaxy. The newfound hydrogen clouds detected by the GBT are depicted in a shade of orange, while gas that comprises the massive hydrogen disk of Andromeda is shown at high-resolution in blue (as mapped by the Westerbork Sythesis Radio Telescope). The newfound objects are likely analogs to the high-velocity HI clouds seen around the Milky Way. At least 20 discrete features are detected within 50 kpc of the M31 disk, with radial velocities that are comparable to those of outer disk rotation. In addition, a filamentary halo component of at least 30 kiloparsec extent is concentrated at the velocity of M31. Some of the discrete features are organized into elongated systems with velocity continuity, suggestive of tidal streams. Possible origins for the discrete and halo M31 features include a Local Group cooling flow, tidal debris from recent mergers or interactions, or the gaseous counterparts of low-mass dark matter halos.
The discrete population can be characterized by a steep power law distribution of number versus HI mass in the range between 10<sup>5</sup> and 10<sup>7</sup> Msun. The velocity line width of discrete clouds is correlated with the cloud HI mass such that if the clouds are gravitationally bound this implies a dark matter to HI mass ratio of about 100:1. In the figure, the HVC analogs are shown with respect to the HI disk of Andromeda (as mapped at high-resolution with the WSRT). The GBT observations were obtained over six nights during 2002 September. The telescope was scanned over a 7x7 square degree region around M31 while HI spectra were measured over a heliocentric velocity range between -827 and 226 km/s at a velocity resolution of 1.25 km/s. At M31's distance of 770 kpc, the GBT beam projects to 2.0 kpc, and our survey covers a 94x94 kpc<sup>2</sup> region. At a resolution of 3 kpc and 18 km/s, the achieved rms flux sensitivity was 7.2 mJy/beam, corresponding to an HI column density of 2.5x10<sup>17</sup> cm<sup>-2</sup> in a single channel averaged over the beam.