Eye on the Universe 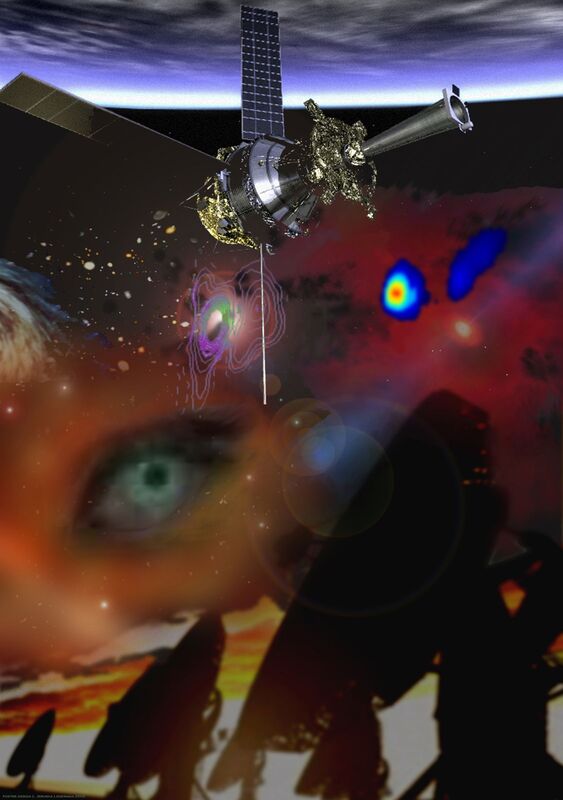 NASA / Stanford's Gravity Probe B (GP-B) Mission is testing Einstein's theory of General Relativity by measuring how Earth warps and twists spacetime around it. Shown above, the GP-B spacecraft orbits Earth at an altitude of approximately 650 km in a polar orbit. In order to accurately measure relativistic effects, the position of a guide star, IM Pegasi (HR 8703), is monitored. IM Pegasi is depicted in the distance as a luminous star system while its radio contours are showcased transparently against the background. The radio astronomical technique of Very-Long-Baseline Interferometry (VLBI) links antennas around the globe and is used to precisely track the motions of IM Pegasi on the sky with respect to the distant universe. One of three extragalactic reference sources used to monitor IM Pegasi's proper motion is displayed in false colour in the upper right of the image. This is the quasar 3C454.3, an extremely distant, highly energetic object containing a black hole at its centre and displaying a one-sided jet. An artist's depiction of the black hole environment with jets is displayed just behind and to the right of the radio false coloured image.
The poster features images of the Gravity Probe B guide star, IM Pegasi (HR8703,) and of one of its three extragalactic reference sources, the quasar 3C454.3. The contoured VLBI image of the star is faintly visible behind the GP-B spacecraft while the false colour image of the quasar 3C454.3, is clearly visible in the upper right quadrant. Both the images of IM Pegasi and 3C454.3 were produced from an 8.4GHz (3.6cm) observing session of the Gravity Probe B guide star, IM Pegasi (HR 8703), and its extragalactic reference sources(3C454.3, 2252+172, 2250+194.) The observations used a global array of telescopes including the ten VLBA antennas, the phased VLA, and the three 70-m NASA/JPL DSN antennas. The image of IM Pegasi was produced from 18/19 September observations, 1999 using the 100-m Effelsberg telescope in addition to the previously mentioned array. The image of 3C454.3 was generated from 15 May, 2004 observations. The observations were made by M.I. Ratner, D.E. Lebach, I.I. Shapiro, N. Bartel, R.R. Ransom, M.F. Bietenholz,J.I. Lederman, and J.-F. Lestrade.