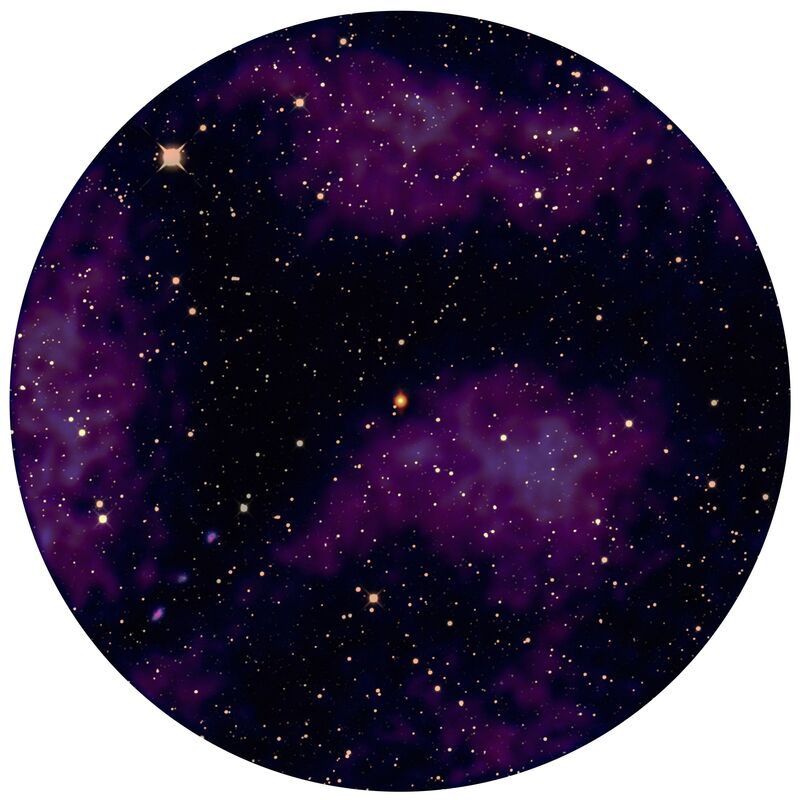 A VLA 'family picture' showing relativistic jet sources of both galactic and extragalactic origin together in the same field thanks to a happy line-of-sight coincidence. The central object is the famous microquasar Cygnus X-3, originally discovered in X-rays back in 1967, and located at a distance of 10 kiloparsec from Earth. Microquasars are X-ray binary systems whose relativistic jets are powered by mass transfer between a normal star and a black hole, or neutron star, companion. Extended emission is also detected in the Cygnus X-3 vicinity, but its possible connection with the microquasar is yet being investigated. At the bottom left corner, one can see a triple radio source with three perfectly aligned components recently discovered at merely three arc-minutes from the microquasar. This object is interpreted as an anonymous radio galaxy well beyond the Milky Way. The central component is where the radio galaxy supermassive black hole is believed to hide, while the other two would correspond to extended radio lobes powered by a bipolar relativistic jet. Microquasars are known to be small scale replicas of their biggest cousins radio galaxies and quasars, sharing both a similar physics and morphology. This image is probably the first case where representatives of both families are simultaneously imaged and resolved so close in the same shot. Three different VLA observing runs of Cygnus X-3 obtained in 1992, 1997 and 2000 had to be appropriately processed and merged in order to produce it. Color scale is logarithmic. The image also contains a background layer showing the same field in the near infrared as observed in 2005 with the 3.5 m telescope and the OMEGA2000 camera at the Calar Alto observatory in Spain.
A VLA 'family picture' simultaneously showing two relativistic jet sources: the famous microquasar Cygnus X-3 and a newly discovered radio galaxy seen practically along the same line-of-sight. The image is a composite of radio (blue-red layer, 6 cm) and near infrared (white layer, 2.2 micron) layers based on observations originally intended to study Cygnus X-3, located at the image centre. The field of view shown corresponds to a 4.4 arcmin radius and the synthesized beam is a practically circular Gaussian giving a 1.5 arc-second angular resolution at radio wavelengths. In the near infrared, angular resolution is about 1 arc-second limited by the atmospheric seeing. North is up and East is left. In addition to the microquasar, an anonymous radio galaxy of Fanaroff-Riley type II is well detected (bottom left corner) at merely three arc-minutes South-East from Cygnus X-3. This much fainter object appears as a remarkable triple radio source with all components perfectly aligned. The central one is believed to be the radio galaxy core and the other two correspond to symmetric lobes powered by a large-scale relativistic outflow. To our knowledge, this image is the first case where representatives of galactic and extragalactic relativistic jet sources can be simultaneously resolved so close in the sky. Certainly, it provides an excellent teaching tool to introduce students to the large family of accretion-powered jet sources in the Universe. The image radio layer comes from reprocessing and combining VLA data of Cygnus X-3 taken in 1992, 1997 and 2000 in the DnC, B and D configurations of the array, respectively. Practically all VLA antennae were available during the observations and the total on-source time amounts to 11 h. This multi-configuration work gives us sensitivity to both arc-minute extended emission and yet enough angular resolution to resolve the arc-second relativistic jets of Cygnus X-3 in the North-South direction. The fact that we recover these transient arc-second features is not unexpected and comes thanks to the 1997 data obtained weeks after a giant Cygnus X-3 radio outburst (Marti et al. 2000, ApJ, 545, 939). Arc-minute extended emission is also detected close to Cygnus X-3 and its possible connection with the microquasar is currently being investigated. The production of the final image has involved a substantial degree of data processing both in the uv and image plane. The central core of Cygnus X-3 behaved as a very strong and fast variable source during the observation. The VLA data had to be split into blocks where variability did not exceed 5%, subtract the variable unresolved core, and later recombine all blocks to produce an almost 'variability free' image. As final cosmetic step, a constant core with the average flux density level of 100 mJy was artificially added to its precise location to restore the Cygnus X-3 morphology. A zero value of the ROBUST parameter was used in the radio mapping process and the primary beam correction has been also applied, restricted to a 50% response. The rms noise achieved close to the phase center amounts to 9.5 micro Jy/beam. Cygnus X-3, its nearby extended radio emission and the radio galaxy are difficult to be comfortably visualised at once due to their wide spread in brightness and angular size. In order to enhance their visual appearance, we have used Photoshop to isolate them from the original FITS file and assigned logarithmic brightness scales appropriate to their respective peak flux density levels. The extended emission was also slightly smoothed using a Gaussian filter. All image features were later recombined into the same radio layer taking good care of preserving their astrometry. As quoted above, the final image also includes a background layer containing the near infrared view of the field also added with Photoshop. This corresponds to a 2005 deep Ks-band image obtained with the OMEGA2000 camera at the 3.5 m Calar Alto telescope of the Centro Astronomico Hispano Aleman (CAHA) in Spain (Marti et al., 2006, A&A, 451, 1037). Its limiting magnitude is Ks=18.7. The near infrared counterparts of both Cygnus X-3 and the radio galaxy core can be seen when carefully inspecting the image. Further details on this image have been reported in Sßnchez-Sutil et al. A&A, 479, 523 (2008).