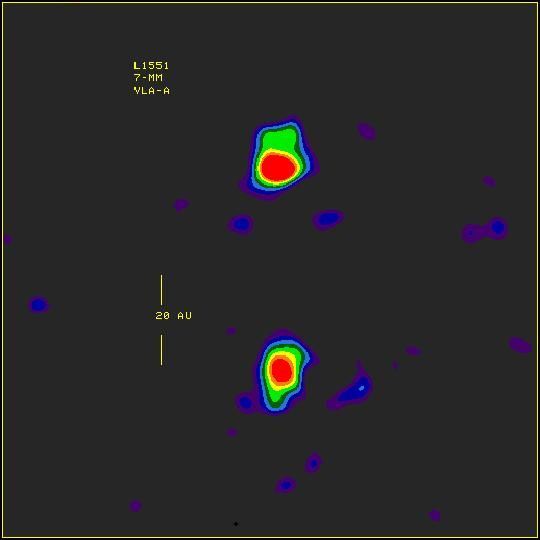 Scientists used the VLA to make this image of a stellar nursery -- a giant cloud of gas and dust called LDN 1551 -- some 450 light-years distant in the constellation Taurus, where stars the size of the Sun or smaller are being formed. They aimed at one particular object that, based on previous infrared and radio observations, was believed to be a very young star. The VLA observations showed that the object was not a single young star but a pair of young stars, separated only slightly more than the Sun and Pluto. The VLA images show that each star in the pair is surrounded by an orbiting disk of dust, extending out about as far as the orbit of Saturn. Such dusty disks, known as protoplanetary disks, are believed to be the material from which planets form. The colors in this image represent relative intensity, or brightness, of the radio emission coming from these disks; red is strong emission and blue is weak emission. The scale bar shows a distance of 20 Astronomical Units (AU). An Astronomical Unit is the distance between Earth and the Sun.