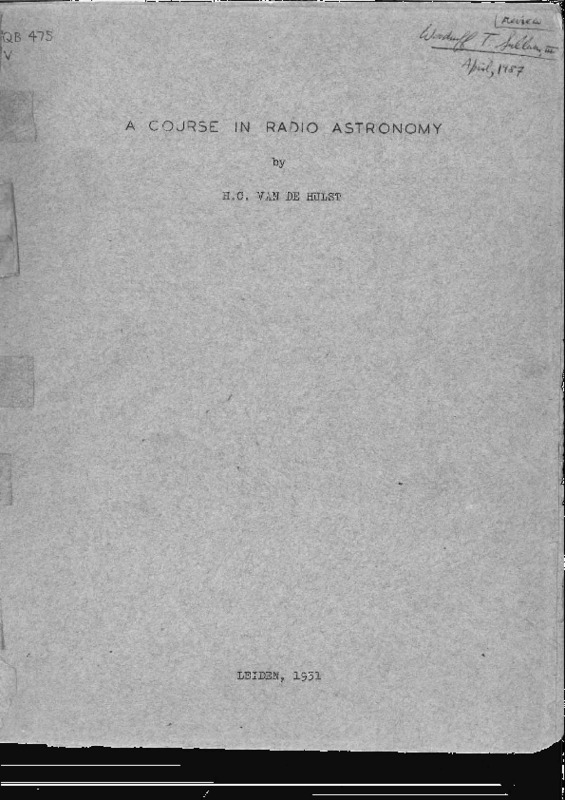 The first known academic course specifically on radio astronomy was taught by Hendrik C. van de Hulst (1918-2000), first at Leiden in Fall 1950, then again in Spring semester 1951 as Astronomy 241b at Harvard University, where van de Hulst was a Visiting Professor. By chance, it was during this very period that H.I. Ewen and E.M. Purcell discovered the 21 cm hydrogen line that van de Hulst had predicted in 1944.

Professor van de Hulst notes in his introduction that, "The lectures were intended to make graduate students in astronomy and physics appreciate the problems and possibilities of radio astronomy and to give them a survey of the results....The notes were written as assignments by the Harvard students, R.B. Dunn, F.Q. Orrall, H.J. Smith, A. Wyller, and H. Zirin." An additional chapter on radar astronomy was contributed by Frank J. Kerr, who was then completing a Masters degree in Astronomy at Harvard, on leave from the Radiophysics Division in Sydney. When van de Hulst returned to Leiden, he further edited these notes, aided by students Gart Westerhout and Hugo van Woerden, who had both taken the course in 1950. The notes were published informally in a mimeograph-type medium, and offered for sale for 8 guilders (~$2) to the astronomical community. For us today they provide an invaluable review of the status of the young field of radio astronomy in 1951.

The pdf presented here was made by W. Miller Goss from a paper copy belonging to Woodruff T. Sullivan III. The underlining and annotations throughout the text were made by Sullivan.
PDF file, 10.2 Mb, 185 pages