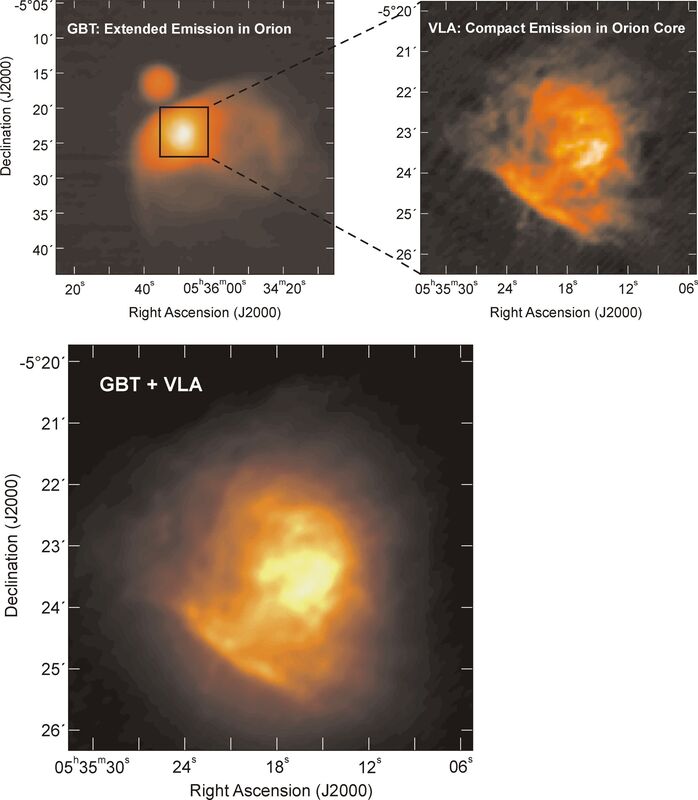 The Orion Nebula is the defining Galactic HII region and has been well studied over a wide range of wavelengths. The top left image shows observations made with the Robert C. Byrd Green Bank Telescope (GBT) of extended emission at 3.6 cm wavelength from ionized gas in the Orion Nebula. The brightest feature with a box around it is M42 (NGC 1976), a thin blister of ionized gas on the surface of the OMC-1 molecular cloud. Winds from luminous stars in the Trapezium cluster ablate the surface of the cloud, ejecting cloud material into the diffuse interstellar medium. M43 (NGC 1982) is just above the northeastern rim of M42 (the circular feature above and slightly to the left of the box). The top right image was made with the Very Large Array (VLA) at the same wavelength as the GBT image. A wealth of detail showing the complex inner structure of the ionized gas is visible with the VLA. The bottom image was created by combining the GBT and VLA images to get a better picture of what the center of the nebula looks like. It combines the power of both instruments: the GBT's sensitivity to extended structure and the VLA's ability to see fine detail.
The GBT image, made at a wavelength of 3.6 cm (8.435 GHz), was taken in an 'on-the-fly' (OTF) mosaic raster mode on 2001 November 1. The image was sampled every 25'' along a row while rows within the mosaic were spaced by 30''. The bandwidth was 80 MHz. The primary beam of the GBT is 1.46' at 8.4 GHz. The central region in the Orion Nebula was imaged with the VLA in 3.6 cm continuum emission while the VLA was in the compact D-array. Observations of the 3 x 3 field mosaic were made on 2000 October 4; field centers were separated by 2.5' (slightly better than Nyquist sampled). The band width was 50 MHz. The primary beam of a single pointing was 5.4', the synthesized beam was 8.4''. The GBT and VLA data were reduced and imaged using the AIPS++ Astronomical Information Processing System. The figure shows the GBT image in the upper left displayed from 0 to 119.4 Jy/beam. The OTF mosaic has an RMS of 10 mJy/beam and a maximum of 119.4 Jy/beam. The dynamic range of the image is 11,900 - the highest dynamic range ever achieved by a single dish telescope. The total flux is 430 Jy. The VLA image (upper right) is displayed on a linear stretch from 0 to 0.83 Jy/beam. The mosaic has an RMS of 6.1 mJy/beam, a maximum of 0.83 Jy/beam, and a minimum of -0.027 Jy/beam. The total flux is 189 Jy -- less than half the total flux measured with the GBT. The combined GBT+VLA image (bottom center) was created using an "image feathering'' technique in which each image was automatically Fourier transformed to the uv-plane, weighted appropriately, combined, and then Fourier transformed back to the image plane. The resulting image has a peak flux density of 1.82 Jy/beam, an RMS of 10 mJy/beam, and a total flux of 415 Jy.