Galaxies are large collections of many millions or billions of stars, along with dust and gas, that are held together by their mutual gravitational attraction. They can be grouped into three main categories: spiral galaxies, like our own Milky Way, which contain both young and old stars as well as gas and dust; early-type galaxies including ellipticals, which contain mostly older stars, and little gas or dust, and which are round or elliptical in shape; and irregular galaxies, whose shapes do not fit into the scheme described above. Some irregular galaxies are dwarfs, which, as their name implies, are generally smaller in size and less luminous. Another class of galaxies is peculiar galaxies, which are thought to be distorted normal galaxies. All galaxies are thought to contain significant amounts of "dark matter" which contributes to the gravitational force but which has yet to be detected by other means. Galaxies may be clustered into groups containing a few to a dozen members, clusters of galaxies which may contain hundreds or thousands of members, or into superclusters that contain tens of thousands of galaxies.

Many galaxies are "active", meaning that they contain central sources of intense optical, radio, and/or X-ray emission. Images of such galaxies are catalogued separately in the class of Active Galactic Nuclei. 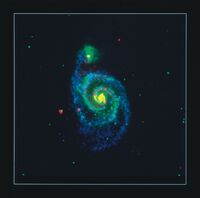 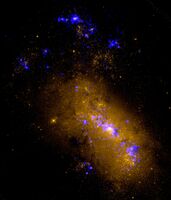 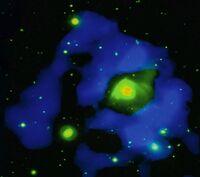 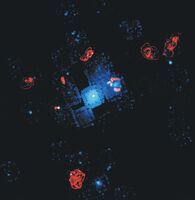 Up Next: Active Galactic Nuclei →