Active galactic nuclei (AGN) are galaxies that have very energetic central regions, due to either the presence of a black hole or star formation activity at the core of the galaxy. Three main types of AGN are quasars, ("quasi-stellar objects" or QSOs), which are very compact objects that resemble stars in optical images; Seyfert galaxies, characterized by fluctuations in brightness at their cores; and radio galaxies, which emit massive jets of gas powered by black holes at their cores. In general, AGN have six main properties: (1) very compact angular size; (2) high luminosity, many billions of times brighter than our own Sun; (3) Continuum emission from the core, meaning that the objects emit radiation at a range of wavelengths from radio to x-ray; (4) emission lines; (5) variability of the continuum and spectral line emission, and (6) strong emission of radiation at radio wavelengths. Many of the images on these pages are Double Radio Sources Associated with Galactic Nuclei (DRAGNs), which are large-scale double radio sources produced by jets that are launched by processes in AGN. 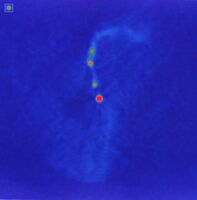 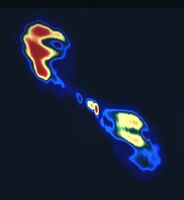 Inner Radio Lobes of Centaurus A 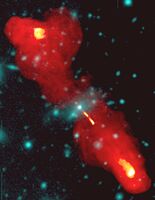 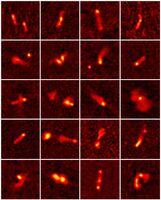 The Extragalactic Sky at 74 MHz

← Galaxies
Up Next: Galactic Sources →